The 160-M Inverted "L" antenna has now been up for almost a week and it continues to PLAY! In the six days since the CQWWDX CW Contest where I added 30 NEW Countries to my 160-M totals, I have worked another ELEVEN (11) NEW Countries! WOOF! My 160-M guru, KØCS tells me I have NOT seen a good band opening yet so this is nothing short of phenomenal to me.

Plus the URØMC contact in the Ukraine was Zone 16 and that was a NEW Zone. I now have 61 Countries and 18 Zones worked on 160-M. The new antenna has added FORTY (40) NEW Countries in just one week. OUTSTANDING!

And, this weekend is the ARRL 160-M Contest so there might be even more new ones added then.

The Further Antenna Adventures of W8TN

The week of November 19th, 2007, I busted my tail to try and get up a 160-M Inverted "L" antenna for the CQ Contest on the coming weekend. I spent the CQWWDX Phone contest on 80-M but with only the 80-M antenna currently up, I thought I'd like to give 160-M a try during the CW weekend.

Pictures describing the antenna construction can be found HERE on the W8TN "New Tower" Photo Gallery. If the photos have been moved to the Archives, check there. The 160-M photos begin with the photo which has the text "19 November I gathered the materials . . ." 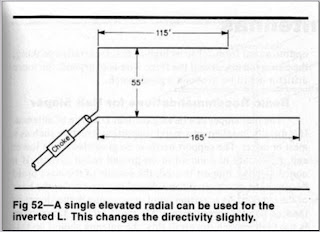 What is NOT shown there is the PAIN I suffered. It took three trips up the tower, staying on the tower one night till 45 minutes after sundown, and an uncounted number of trips through the woods behind my house. Working by myself caused me to have to come up with some inventive ways to do the project. All this resulted in many bruises, scrapes, abrasions, and a pulled muscle in my side which has caused me the biggest problem. Why is it that little projects like this cause so much trouble when you are nearly 60 years old?

First I had to gather the materials. This involved a trip to Home Depot and then the Water Company. I needed to construct an RF choke (several turns of coax) and I found a description in the ARRL Antenna Book of one using 30 turns of RG-213 on an 8-inch diameter piece of PVC. Turns out Home Depot doesn't have anything that large but the Water Company graciously gave me a 6-foot piece. So if anyone needs some 8-inch PVC, I have almost 5-feet left.

To get the antenna to come off the tower horizontally at 60-feet above ground requires putting a line over a tall tree or two to support the antenna wire. The EZ Hang slingshot with spinning reel which I have used several times in the past, failed me. I had installed a new set of elastic tubing bands and a new roll of fishing line but, for some reason, I could not keep from snagging the line in the elastic bands when trying to launch it from the ground. So, after 6 or 7 failures to launch the line, I had to climb the tower and hang off the side to launch the line over a couple of trees. This time it worked! So, I climbed down, trekked through the woods and tied the fishing line to some Dacron antenna support line (note the Boy Scout method I used to let the line unroll freely in one of the pictures linked above.) Back at the tower I reeled in the line and attached it to the antenna. Then, off through the woods to pull the antenna up and check the SWR with an MFJ-259B Antenna Analyzer.

Imagine my disappointment when the antenna showed an infinite SWR! I was crushed. Three days of difficult work seemed lost. So, I checked everything I could then I called W8DL. Don was shocked that it did not work as my dimensions were nearly the same as his. However, his antenna played against a conventional ground radial system and I was trying the "quick and dirty" single elevated radial for my installation. He suggested either removing the RF Choke or modifying the radial system. But, I was short on time and did not feel I could get a good enough ground installed before the contest.

I then called my 160-M guru, KØCS, and he was stumped as well. However, he did comment that the dimensions I was using (straight out of the ARRL Antenna Book) seemed a bit too long for him. He suggested that I cut 30-feet off the radial and see what happened. Then, I could lower the vertical radiator and cut some off it until a match was found..

So, on Friday (the day the contest started) I braved the 30-degree temperatures and climbed down the hill with my tools. As I was going over the hill Evelyn yelled down that KØCS had called and said to try moving the antenna further away from the tower. So, I tried that and found a bit of an improvement but only a negligible amount. Then I hiked out to the end of the radial and cut off 30-feet. Back at the tower the MFJ-259 Analyzer said I had made a nice change in the resonant frequency but not enough by far. So, back through the woods to attach the roll of Dacron to the end of the vertical radiator. NOTE: Here is where I made a crucial mistake! It was cold, snowing, and windy and my brain failed to realize that when I pulled the antenna back up, the end I was tying the line to now would be up in the air. I mistakenly thought I would only need a temporary knot on the Dacron. WRONG!

Then, back to the tower and up I went. At the 60-foot level I carefully pulled in the 110-feet of the radiator tophat and, while hanging on the tower in the wind, measured and cut off 30-feet. I then carefully arraigned the wire so it would not snag and went down the tower and out through the woods. I then proceeded to pull up the antenna. When I thought I almost had it to the end, it seemed to snag and I gave a little more pressure to the Dacron line and suddenly it went slack. Yep, the "temporary" knot had untied and the end of the antenna support line was 20-feet in the air! RATS! All this work and now the antenna was at the mercy of the wind and roosting birds. The slightest thing would cause it to fall. And, I had snagged the fishing line and could not use the slingshot (if it would even work again!) Needless to say, I was bummed out!

But, I carefully wound the Dacron back on the reel and trudged dejectedly back to the tower. I put the MFJ on the antenna and VOILA! It was now resonant at 1.75 MHz. Close enough to 160-M that it just might work.

So, I wearily pulled my aching body back up the hill and fired up the amp. Yep, it would put out 1,000 watts up to 1.835 Mhz. with no difficulty. So, I fired up the laptop computer for logging and got ready to start the contest in just 45 minutes! That's cutting it close.

As they say, the proof is in the pudding (or the QSO's.) In my 43 years of ham radio, I had dabbled at 160-M a time or two but never had a decent antenna. My country total for that entire 43 years stood at just 20 countries confirmed (plus one deleted country, Y - German Democratic Republic.) However, this weekend, I added (30) THIRTY (30) NEW Countries and 7 NEW Zones to my totals! WOW! Am I excited now? Yep!

Here is my contest score:

Bear in mind I was not trying for a contest "score" but only seeing if I could work some new countries. Well, I sure did. I even stayed up that first night until 7:30 a.m. and tried for over 1/2 hour to work a JA. I heard him really quite well but he never got a peep from me. I did manage 5 continents and only missed Asia for a WAC my first night on the band from the new QTH. And, that was with no receiving antennas and not very good conditions.

If the birds and the wind will just leave the wire alone for a few months I'll have some more fun on the band. If not, it looks like more work to get the antenna tuned better and then back up over the trees. But, at least I proved the concept.