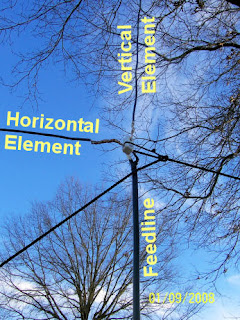 Today, Steve, KC8FVE, and I helped Tim, KC8UHE, erect a clone of my 160-M Inverted "L" antenna. Shortly after I left he worked a station on SSB in Iowa and later he was in the pile-up for NP4A but was beaten out by Phil, W8UV, with his new "Killer" antenna. Of course, we don't know how much power Phil was running (Tim was running 200 watts.) And, after Phil completed his QSO, Tim broke the pileup next. Not bad I'd say.

Here are a couple of photos of the antenna. The first shows the feedpoint. The unmarked lines are just support ropes. The second photo shows the elevated radial being supported by 5-foot lengths of PVC. 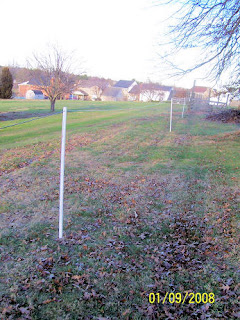 Tim used a 30-year old Zebco Model 33 spinning reel (with rotten line!) to cast a lead weight over two of his neighbor's trees. (The neighbor is very friendly in letting Tim use her trees as antenna supports.) A support rope over the first tree held a pulley that the center of the Inverted-L was threaded through and pulled horizontal by a rope that was cast over the other tree. The first iteration had the antenna about 6-feet too long. So, we let down the end of the center conductor, cut off 6-feet and pulled it back up. The process could not have been simpler. The new length had the SWR 1.0:1 at 1.840 MHz. The photo below shows the tree which supports the end of the "hot" side of the antenna after it transitions from vertical through the pulley on a similar tree. 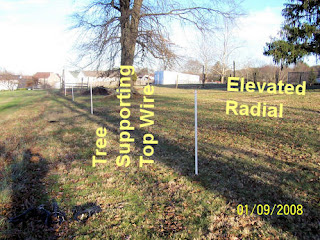 Now that Tim has joined the ranks of those using the infamous "W8TN - Inverted-L" 160-M antenna. We will both be in competition with Phil in the pileups. It will be interesting to see which antenna wins out.