OK, we set the official date for the installation of the SteppIR 4-L yagi with the 30/40-M option for Sunday, 11 October 2009. I put out the call on the WVDXA Reflector for persons who would be willing to come and help with the operation. Several people responded that they would be there. However, I was more than a little surprised to see that TWELVE hams showed up to help. What a fantastic turnout! I did not get any photos of all 12 at the same time but here is a single shot with 9 of the guys (click on any photo to view it larger.) All photos except this first one were taken by Hal, W8HC. 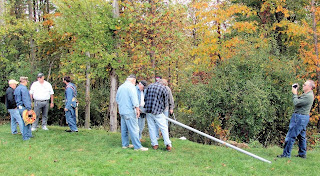 There was a lot of discussion about what had to be done and then folks just started DOING stuff. I am still stuck in this wheelchair so all I could do was supervise from my hamshack door. I had stayed up until 2:30 a.m. the night before getting all the "parts" ready. Tim, KC8UHE, had taken me "shopping" on two days in the prior week to acquire all the bits and pieces we would need. We had communication over 2-M H.T.'s between those outside and myself in the shack so everyone knew what was happening.

Mike, NU8LL, aka the "Tower Man", arrived and hit the ground running. He began instructing the ground crew in how he wanted them to do everything while he was up on the tower. Safety was stressed all around and I'm proud to say no one received any sort of injury during this operation. Here some of the Ground Crew are shown pulling on the rope (well away from the base of the tower) to raise the antenna (L-R, KC8UHE, KE8V, WA8VPN, & N8RR): 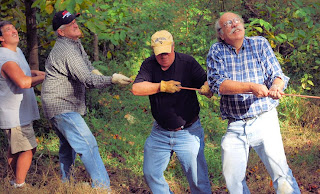 In the following photos you can see the antenna as it reached the top of the tower and then after Mike, NU8LL, flipped it over and attached it to the mounting plate. The antenna is now UP. It sits atop a Rohn 45 tower at about 86-feet above ground. The hillside behind the house slops very steeply so that the base of the tower is 30-feet below the top of the hill. 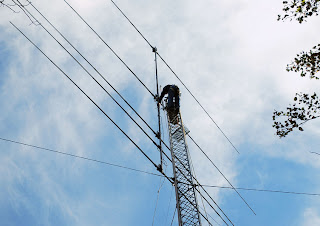 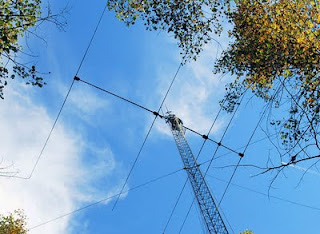 The group was here for as long as TEN hours but when they left, the antenna was atop the tower and fully functional. All the fine details were attended to and the only job left is to run the coax through the PVC tubes up to the top of the hill and then through more PVC underneath the back yard and up into the shack. In the interim they thoughtfully brought the cables up to the hamshack window so that I could go ahead and put the station on the air (and I have!) Come Spring a 6-M beam will be installed above the SteppIR but in the meantime, I'm back on the air!

I should also mention that my wife, Evelyn, cooked up a large pot of homemade chili, and made a couple of pans of Brownies! That made for a wonderful meal break before the guys began pulling up the antenna.

Here is an 8-minute video that shows several scenes of the operation. The video was shot by Garry, W8OI. On the bottom row of the YouTube video below, you can click on the next to the last icon (a small rectangle inside a larger one) and it will switch to Full Screen mode. Press your ESC key to return to normal mode.

As an extra added benefit to the day, the DX'er Emeritus of the WVDXA, Bob Hall, W8QHG, was celebrating his 93rd birthday the very next day. So, unknown to Bob, the WVDXA surprised him with a Birthday Cake and a Card signed by all the club members present. He was truly surprised and I was amazed that he stayed here for 6 hours watching the installation. Here is a short video of the presentation of Bob's Card and Birthday Cake:

Below you see the beneficiary of all this work, W8TN, peering longingly out of the hamshack door. I so wished I could have been out there in the middle of all this activity. 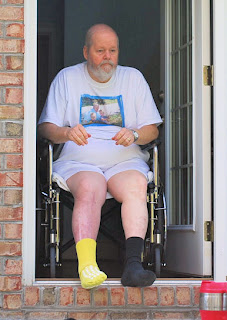 I want to especially thank all those who were here that day:

I also want to thank those other members of the WVDXA who helped previously both in person and on the email reflector. It is my privilege and honor to belong to such a wonderful group of hams. It just doesn't get any better than this!