W8HC Getting "Special" Medicine in CAMC 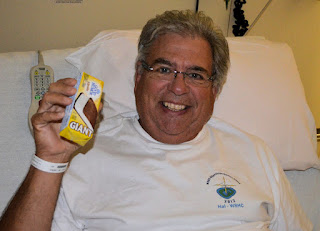 Today I visited Hal, W8HC, at CAMC Memorial.  He has been a patient there since Saturday when he returned from the NH8S, Swains Island, DX'pedition.  Hal was my tent mate on Swains and it seems he protected me from some invading spiders.  However, that meant that Hal "took one in the leg" - a spider bite that is.

On the serious side, this has NOT been a walk in the park.  Hal has been limping for several days and the leg swelled up quite a bit and was obviously infected.  Upon his return from Swains Island Hal immediately sought medical attention at the CAMC Emergency Room.  After about 10 hours they decided to admit him.  They drained his leg and put him on IV antibiotics.  One of the procedures performed on him was when a doctor stuck a 6-inch needle into his leg at four different places to measure some sort of internal "pressure."  Hal said that even though they had numbed his leg, that needle hurt like the dickens.

The pathology report came in with the finding that his infection was MRSA (methicillin-resistant Staphylococcus aureus.)  That is very serious!  Hal assured me that his doctor was confident that they had his infection under control.  He will finish his course if IV antibiotics and should be released tomorrow.  He will go home on some oral antibiotics.  It may take a few more days to get back to being able to go back to work but he is cheerful and has a bright outlook for the future.

I tried to help with his recovery by taking him some special NH8S "medicine" (see photo.)  Also, I took my tablet computer and played for him the David Jennings song, "Take Me  Back to the Shores of Olosenga" performed by David Jennings and the Swains Island Support Crew.  This recording was made by Mark, NA6M, on our last night on Swains Island.  Hopefully the music and the special "medicine" will help Hal recover as quickly as possible.  As you can see in the photo, Hal was wearing the T-Shirt given to the NH8S operators by Alex Jennings on behalf of the Jennings family and friends who helped support the NH8S DX'pedition.

Hal has maintained his sense of humor about all this by posting on the WVDXA Reflector the following:


"On the upside, since the Swains Island spider bite, I have developed this incredible super strength and am able to sling spider web material from my wrists.  The medical staff here is amused by my ability to climb walls and swing from my web strands. I think I'll use this extraordinary power to fight crime.  Or, see if it will make good antenna guying material."


Hopefully Hal's new "Spidy Sense" will enable him to avoid such encounters in the future.  Wishing you a very speedy recovery, mate!