I then removed the "compensation" in the Rotor Driver program so whatever the Inclinometer said was what the program took as correct.  Over the next few hours, I let the system AutoTrack and I kept visually checking the antennas and the elevation now tracked perfectly!  I still have the 7° "compensation" factor on the Azimuth readout but that is not a problem.  Not much else got done Friday evening because that "tower climb" set my back off and it was difficult to just sit in a chair.  It's a good deal better today but still hurts.

Today I thought I would finish off some more of the little bits of the project that were still hanging.  The first thing I tackled was to wire up the CX-600NL relay that switches the Elecraft K3S between the RX (receive) line and the TX (transmit) line to the W6PQL solid-state amp.  I first soldered a 1N4003 diode across the coil of the relay.  This is done because an inductor (the relay coil) cannot change it's current instantly so the flyback diode provides a path for the current when the coil is switched off. Otherwise, a voltage spike will occur that may cause arcing on switch contacts or possibly destroy switching transistors.  I then wired a shielded cable with an RCA connector on the other end to the relay coil.  This cable will plug into the "TR" connector on the DEMI Sequencer so that 12 VDC is supplied to the CX-600NL relay for switching it as necessary from TX to RX.  Being honest with you all, the first time I soldered this cable I had too much tension on the center conductor and the heat of the soldering iron melted the center conductor right through the insulation.  That could have resulted in a short at a later time so I cut it off, removed the soldered ends and did it again being more careful this time.  But, I wasn't careful enough with my finger as I managed to lay it "briefly" on the soldering pen and got a slight burn for my lack of caution! 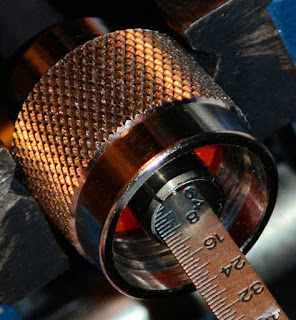 Not having an elegant method of mounting this relay, I just installed a screw-eye in the back of the equipment shelf and used a Ty-Rap to secure the relay to it.  Again, I was less than careful and my first placement of the Ty-Rap interfered with the relay's motion so I cut it off and picked a better location the next time.  The photo on the right should be horizontal but Blogger insists on putting it vertical.  What can you do?

Another "self-inflicted" problem occurred when sometime later I tried to turn on the Kenwood PS-430 power supply for the Elecraft K3S.  It would not come on.  I pulled it out and checked the fuse which was good.  Luckily at that point (before beginning more extensive tests) I noticed that the power cable for the PS-430 had come loose and fallen behind the operating table!  I guess I did that while messing with the installation of the CX-600NL relay above.  Oh, well.  At least that was not hard to fix.

I tried to avoid problems like this in my project by purchasing NEW cables.  This cable was purchased January 18, 2016 as an N Male to N Male Cable 36 Inch Length Using RG142 Coax for $13.50 plus $3.35 shipping.  I guess I'll try to contact the eBay seller who sold me this for either a replacement or a refund.  In the short-term, I found a 1m N-to-N piece of 1/2-inch Heliax that I can use in the meantime.

It turns out that my checking of each step of this project has turned out to be a good thing.  I don't know how long it would have taken me to track down this problem if I had not been checking everything one step at a time.

I have nearly finished wiring the 3 kW power supply for the W6PQL amp needing only to put the 220 VAC connector on the end of the cable.  Once that is done, I can hook it up to the 220 line and see if it will produce 48 VDC.  At that point, I'm ready to slap some RF to the amp and see if I can blow something up!

On the photo at the right you can see I have run the Red and Black cables from the output pins of the power supply through a toroid to hopefully cut down on any RFI from the power supply.  The Green, White and Blue cables at the top are the 220 VAC input cables.  The Blue cable runs through a switch on the front of the amp that switches the power supply on and off and provides protection from high inrush current that is common to switching supplies.

I also labeled and connected the PTT cable from the DEMI Sequencer to the W6PQL amplifier.  That is one other part of this project that has taken a bit extra time.  I have tried to document everything I have done on this project so that if need be, I will not have to re-invent the wheel if I need to trouble-shoot any future problems.  Also, I have tried to be meticulous in labeling all cables so that if anything becomes disconnected or needs to be checked, it will be obvious where that cable goes.  Plus, if I should need to disassemble and move the station in the future, it will be a snap to put it all back together.