OK, it was a bit of a struggle today but I finally managed to nearly complete building Antenna #2.  After building Antenna #1, I thought this would only take me 3 to 4 hours to complete.  However, that was not the case.  I have been having issues with my hip and that slowed me down a lot today.  I took a bar stool into the garage so I could sit for most of the work while I had the antenna supported on saw horses. 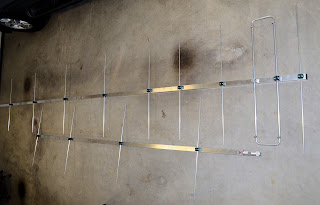 But, besides my hip problem, I found that 9 of the 11 Director elements were NOT marked in the center like those of Antenna #1.  So, I had to measure each element, cut that measurement in half to find the middle, mark it, then mark the edges of the mounting bracket.  This slowed things down a good bit.  Then, while measuring the elements, I became suspicious that the elements (although marked as D1, D2, D3, etc.) were not in the correct order.  The manual does not include the element lengths so I ended up climbing a step-ladder to measure the first 4 elements of Antenna #1 to see if they were the same.  They were.  Once all 13 elements were mounted, I placed both sections of the antenna on the floor of the garage.  You can see what Antenna #2 looks like in the photo above.  Click on it for a larger image.

Having learned a bit from putting together Antenna #1, I decided to not put the boom sections together between the 3rd and 4th sections.  That allowed me to complete the build of Antenna #2 totally in the garage.  All I need to do now is to connect the two boom sections and both Antenna #2 and Antenna #1 will be in the same point of construction.  I did not keep a stopwatch on today's work but I think it took me about 7 hours instead of the 5 hours for Antenna #1.

The next step is to build the boom truss for each antenna and install the boom-to-mast bracket.  At that point, the antennas will be ready to mount on the Fiberglas cross-boom.  Then, I need to tune them and connect up the feedlines.
Progress is definitely continuing!  Stay tuned!