Whew!  Who would think such a simple job as building a couple of 2-M antennas could take SOOO long?  Today was another 7-hour day but a major milestone has been reached.  Construction of both antennas is now complete.  whup >  whup >  whup > whup >  whup >  Did you see that?  It was me giving myself a Big High FIVE!  OH, and it hurt - duh!  These things were a whole lot easier 30 years ago.

Today I took Antenna #2 out of the garage and mated the final boom sections.  Then, I installed the Antenna Boom Truss and finally the Boom-to-Mast bracket.  On the right you can see the Antenna Boom Truss while the antenna is balanced on the WorkMate.  I did this so that I could adjust the turnbuckles of the Truss to support the boom of the antenna in a level position.

After completing the work on Antenna #2, I took Antenna #1 down from its resting place on the roof and carried it around to the garage so I could install the Antenna Boom Truss and the Boom-to-Mast bracket on it.  (NOTE:  This was a whole lot easier than putting it up there as "gravity" was working in my favor!)  I continued to use the bar stool to sit on while doing most of this work.  My hip and back are still "complaining" a bit so I've been trying to take it easy on them.  All the hardware was installed using Never-Seez and that added a lot of time to the project.  However, if anything ever needs to come apart, it will do so EASILY! 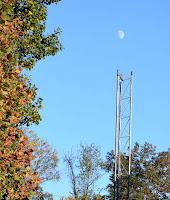 Once the work was finished on both antennas, I did not want to leave them sitting on the ground for the deer (or a prowler) to step on.  So, I figured I could put them both up on the Fiberglas cross-boom and let them rest on the roof again.  This time I got Evelyn to help me with the project as my back was not really up to trying to man-handle the antennas by myself since gravity would NOT be my friend this time!  I stood on a step-ladder and hand-walked the antenna up as Evelyn brought the back end in toward me.  This worked out well and I was able to fasten the Boom-to-Mast bracket from the antennas to the Fiberglas cross-boom with little difficulty.

BUT - (there always seems to be a "but" in these projects) - I had placed the Boom-to-Mast bracket a little too far toward the rear of the antennas and they were pretty front-heavy.  It will be easy enough to loosen the brackets and slide them up the boom to achieve a better balance point.  I just didn't have it in me to try and do that today.

As I took a photo of the antennas resting on the roof, I spotted the "target" of my project and snapped a photo of it.  You can see that photo on the right.  Click on any photo to see a larger image.

It sure will feel good when I have the antennas balanced and secured to the Fiberglas boom and have the rotors turning them to point at the "target."  Hopefully that time will come within the next week.