The EME Antennas Can Really HEAR!

Steve, G4TRA, emailed me on November 9, 2017, and asked to run a schedule with me on EME the next morning.  He runs a single 11-element Tonna antenna plus 400-watts.  I felt that was WAY too small a station for me to be able to work but agreed to run with him.  Amazingly, during one of his Ground Gain lobes, I did indeed copy him when his elevation was just under 11°:

He was able to copy me on 10 different sequences (I run twice his power and more than twice his antenna.)  However, we were never able to complete the QSO.  We agreed to try again the next day.

Before my schedule with G4TRA, I made a nice QSO with GM6JNJ in Scotland (by answering his CQ) for a New Country and later I made QSO's with the following:

All those were New States for me.  So, all in all, a very productive morning.  Maybe the second biggest surprise (after copying the single antenna station) was that I copied full calls and "OOO" report from K1DG at a signal level of -31 dB.  That is a record for me on weakest signal copied.  I have copied calls or CQ's at -29 dB before but this is my lowest.  Of course, "Shorthand" reports of RO, RRR and 73 have been copied several times at -31 dB but never full calls plus report.

At 10:30 a.m. local time there were several JA stations on the moon but I could not copy any of them.  They did not seem to be copied by many other U.S. stations either so there must have been some one-way propagation at that time.

The next morning I had plans to run again with G4TRA about 7:50 a.m.  Plus, I received an email from SuperStation I2FAK who wants to run with me also.  But, back to the "Good News, Bad News" mantra!  I got up at 1:30 a.m. and when I turned on everything, I found the elevation rotor would not turn!  BUMMER!  It was 25°F (-4°C) outside and I guess the rotor just did not have enough torque to break itself free.  Maybe the grease on the gears had gotten stiff.  So, I had to cancel both schedules.  Eventually when the outside temperature reached 41°F (+5°C) the rotor worked just fine. 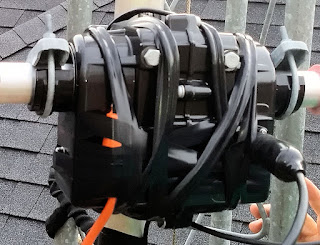 I picked up a 6-foot water pipe heat tape at Home Depot to wrap around the Elevation Rotor to try and keep it warm enough to rotate.  Back at the house I managed to fight through all my boo-boos:

Climbed the tower and dropped the AC Extension Cord
Dropped one glove
(Evelyn came out and taped them to a cable for me to pull up.)
Dropped the electrical tape
(I had to climb down and retrieve it.)
Came down the tower again but forgot to tape the extension cord where it goes around the azimuth rotor.
(I had to make one more trip up the tower.)
Dropped my water bottle - TWICE!

FINALLY, I now have a 6-foot heat tape wrapped around the elevation rotor.  You can see a photo of the Elevation Rotor wrapped with the Heat Tape on the right.  Click on that photo to see a larger image.  Of course, there will not be a night where the temperature falls lower than 33° for at least the next 8 days.  I will have to wait awhile to see if this works.