On Tuesday night 160-M sounded very quiet. The night before I had worked 5T5DC but conditions were lousy. But, Tuesday they sounded so much better I set the alarm for 7:30 a.m. on Wednesday morning to try and work something out in the Pacific. When I struggled awake to the blaring of the radio I almost turned over and went back to sleep. I had only been in bed about 3-1/2 hours and was rather bleary-eyed. But, I turned on the radio instead to see what was afoot.

I heard W8JI and AA1K calling CQ but not a trace of any DX signals. Then, I heard W8JI working someone and it turned out to be VK6HD! I had never heard a VK6 so I listened and was just barely able to copy him. So, I started warming up the amp, just in case.

There was nothing being spotted on the PacketCluster so things did not look too good. I tuned around a bit more and then heard K1JO a bit above W8JI and he was working VK6HD! I still did not have great copy on VK6HD but thought I'd set up shop a couple of kc. above K1JO and see what happened if I called "CQ DX."

Lo and behold, after my very first CQ (my first CQ DX in quite a long time - years maybe) I was answered by VK6HD !! WOW! His signal was now MUCH better than before. (As it turned out, it was just exactly my sunrise and one day before the spring equinox.) The QSO we had was not pretty as I was so nervous I could barely work the paddles. But I completed the QSO with Mike (VK6HD) successfully. This was the longest DX I have EVER worked on 160-M. 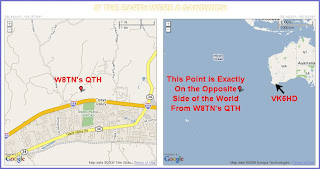 As you can see by the above map (Click on it for a larger view), VK6HD is just 1,128 miles away from the point that is the exact opposite side of the world from me. And, there is nothing very near that point (except water) so I expect that this will stand as my longest QSO (on the Earth) EVER! The distance from my QTH to VK6HD's QTH is 11,313.4 miles. WOOF! That's a haul, AND I did it on Top Band with the Monster-L!

Oh, and when I turned to the computer to log the QSO, I saw the following on the PacketCluster:

By the way, it was 7:41 a.m. here in Hurricane, WV, when I made this QSO but it was 8:41 P.M., TOMORROW, for VK6HD! I worked him on Wednesday MORNING my time but it was Thursday EVENING, his time! Aren't you glad we use GMT for our logs and QSL's?