After I discovered last Friday that the vertical portion of the 160-M Inverted-L was broken off at the feed point, The Archer, Charlie, N8RR, volunteered to bring his trusty bow and weighted arrow to my QTH and fire a line over one of my trees to erect a NEW Top Band antenna. I then gathered up all the materials last night and this morning Charlie showed up followed by the DX Hunter, Tim, KC8UHE. The three of us managed to make it down the hill without incident and in less than 80 minutes, we were done! Charlie fired his arrow perfectly over the nearest tall tree at such an angle that it not only cleared that tree but one further along and the arrow then fell all the way to the ground. That meant the vertical portion of the Inverted-L would rise almost straight up and then be horizontal at the top - a near textbook installation.

Charlie had fishing line attached to the arrow which he removed and attached to some light line. The fishing line was reeled in and the end of the light line was attached to a piece of Dacron antenna support rope. That was pulled up and over the trees and then it was used to pull up the end of the Inverted-L. Tim and I had cut a 135-foot length of No. 14 stranded copper cable for the antenna. I decided to cut it for 135-feet even though I thought it would end up at 130-feet after trimming the antenna to resonance. I just wanted to make sure I had enough wire in the air before tuning it. Charlie said he thought the antenna should be 130-feet (just what I thought!) and he suggested we go ahead and shorten it by wrapping the last 5-feet back on the end of the antenna. We did that. 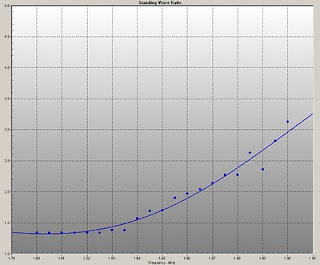 As we were pulling up the wire, when the insulator on the end of the wire transitioned from vertical to horizontal at the top of the first tree, Tim and I estimated that we only had about 30-feet of wire left. That should mean that close to 100-feet of the antenna is vertical. Boy, oh boy! I can hardly wait for SV5 to show up tonight! He's MINE!

Thanks again to The Archer and the DX Hunter for their fabulous help. I'm really excited about being back on Top Band, if only for the very end of the season.

My First Trip "Over the Hill"

With the weather finally beginning to look like something less than you would find in the Arctic, I felt it was time to give the old broken leg a test and see how it could deal with the "Hill" behind my house. I have not been down to the tower since sometime in June of 2009 (maybe 9 months!) With the 160-M Inverted-L being out of commission, I felt I needed to go and check things out to see what I could do to fix that. And I wanted to see if I could find out what is wrong with the SteppIR. I had noticed a couple of weeks ago that the SteppIR was not functioning properly. Testing from the shack showed that there was no continuity to one of the motors that drives the Reflector. I had thought it might be a broken wire in the control cable and surmised that a deer might have stepped on that cable or a tree fallen on it.

Unfortunately, in checking the exposed cable all the way from the underground PVC pipe at the top of the hill to where it goes up the tower, nothing was found that could cause that problem. Rats! This will not be an easy fix.

But, I did find several other things that were not right. There 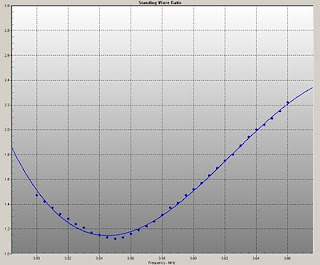 were 7 or 8 trees or large limbs that have fallen either due to wind or snow this winter. One tree is across the NE guy wires so it needs to be removed SOON! I also found that the 2 elevated radials for the 80-M Vertical that Charlie, N8RR, and Tim, KC8UHE, installed had fallen down. I managed to force my way through the briers and brambles to find a place to tie off those radials. When I got back top-side, I ran a check on the SWR for the 80-M Vertical and it looks very good. See the graph at Right - click on the image for a larger view. The SWR is under 1.5:1 from 3.500 MHz to 3.600 MHz with the best SWR being 1.13:1 at 3.550 MHz. Nice! 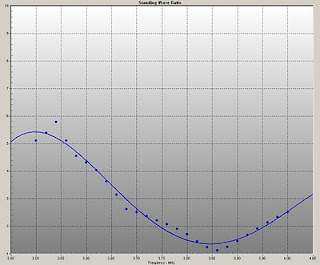 insulator. Thank goodness I had not soldered or otherwise strongly secured that wire or it would have pulled down the entire antenna. I found the rope and end insulator, retrieved them from the fallen tree, re-connected the insulator to the end of the Inverted-V and pulled it up and attached the rope to another tree. Back in the shack I ran a test on the 80-M Inverted-V. See the graph at the Left - click on the image for a larger view. This antenna is under 2.0:1 from 3.765 MHz to 3.950 MHz. Also fine!

One of my main reasons for going over the hill today (in addition to checking the SteppIR control cable, was to see if I could get the 160-M Inverted-L back in operation. That did not happen. What I found was that the vertical portion of that antenna had broken off right at the feed-point. The wire was still secured at the top of the tower but the horizontal top-hat had obviously either come loose at the far end or broken because it was draped in the tree-tops. So, in order to repair that antenna, I need to somehow get another wire either up the tower and out to a tree or just up and over a tree. Maybe Tim or Charlie can bring their bow and arrow and shoot a line over a tree enough to let me at least get back on Top Band before the season is completely over.

All-in-all it was a very good trip. I found that my re-hab of the broken leg has improved to the point where I can get down over the hill and back up. I even climbed up the tower about 3 rungs just to see how that went and it was fine. But, the bad news is that the SteppIR fix is going to be a little more involved. After a long conversation with Tech Support at SteppIR the consensus is that either the control cable has "rubbed" against something on the tower and broken one wire OR a wire has broken at the connection point where the cable attaches to the barrier strip on the boom of the antenna. In any event, it can't be fixed from the ground.