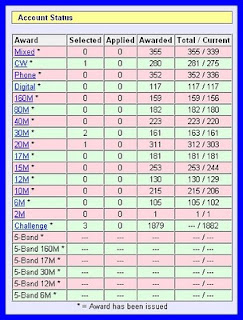 My last DXCC Endorsement Application has now been processed by ARRL Headquarters and my 12-M DXCC has been issued. That now completes a 10-Band DXCC SWEEP for W8TN!

You can click on the image at the left to see a larger view. Then, click on the BACK button in your Browser to return to this page. OR, if you see the image on top of a greyed out image of this Blog, just click anywhere on the Blog page.

The individual "DXCC Awards" are shown in the left-most column. As you can see from the bottom of this image, an asterisk "*" after the award name means that award has been issued. The only one without an asterisk is 2-M.

I managed to reach this 10-Band DXCC after 46 years and 10 months as a ham! I'm sure I could have done that a LOT quicker if I had spent more time sending QSL's for contacts I had made in years past. However, the expense of sending cards was high and I was initially only concerned with the basic DXCC. So, once I got a country confirmed, I never sent any more QSL's for contacts made on other bands (or modes!)

It looks like I now need to get busy trying to accumulate another 99 QSL's on 2-M in order to reach that elusive 11-Band status! But, in the meantime, I'm working toward that 2,000 Medallion for the Challenge (thus adding more numbers to my individual DXCC awards) and looking for that P5 to put me at the Top of the Honor Roll. No time to slack off now!

After watching Eric, K8OHZ's Digital Demonstration at the last WVDXA meeting, I was getting enthused about trying some new Modes. Then, at the WV State ARRL Convention, Steve Ford, WB8IMY, gave a presentation on JT-65 and I was hooked. Tonight became the time for me to give it a try. I have made many QSO's using other WSJT modes in the past on 6-M, Meteor Scatter and Whisper. But, JT-65 was a new one for me.

I thought it would be simple but I ran into a few roadblocks along the way. Getting the radio to STOP keying was the big problem. That turned out to be a simple click of the mouse in the microKEYER II Router Software. It seems that I could have save myself a LOT of headaches if I had just Read the Fine Manual (RTFM) first! 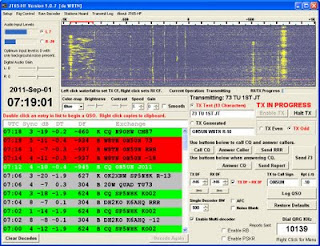 After that hurdle was cleared, I had to spend some time getting used to the software. Maybe it was because it was 2 o'clock in the morning but I seemed to be a little slow to pick up things tonight. Anyway, I answered a couple of stations (SP and G) on 20-M but they did not hear me. Do you think running 5-watts into the 160-M Inverted-L could have been the problem?

Well, as it got later and later, the stations got fewer and even though I upped my power to 20 and then 40-watts, I could not work anyone. Finally I moved to 30-M and saw a good signal from ON5UN. I clicked on his "CQ" (5th line down in the screen capture on the right at 0712) and gave it one more try - (I had upped the power to 60-watts just in case!) You can click on the screen capture to make it larger, then use your BACK button to return to this page.

As you can see on the screen, ON5UN answered me and we had a FB QSO. The software automatically generates the signal report (no 599 on every QSO) and I gave him -10 dB which is 10 dB below the noise. He gave me -18 dB so I was MUCH weaker to him. However, he copied everything on just one transmission so it was all good. You can see the software marks CQ's in Green, QSO's in progress are in Gray and when the other station has received my call, it is in Red. The Red lines show what I received back from ON5UN.

This mode is not going to break any speed laws as it takes about 5 minutes to complete a QSO. But, it's a hoot to do it! Each transmission period is a minute. You can see that ON5UN was transmitting on all EVEN minutes and I was transmitting on the ODD ones.

There were many more stations on the air on JT-65 tonight than I expected. I'll probably have to give it another try (after I get some sleep - it's 3:50 a.m. now!)