EME is Not Always Easy 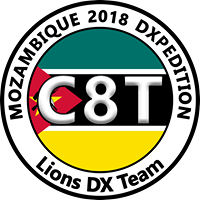 There is currently a DX'pediton to Mozambique, C8T, (http://dxpedition.c8t.cc/) and they have a 2-M EME station.  As that would be a New One for me on EME, I made plans to be at the radio to try and work them.  They are not a large station as they are running two 11-element yagis mounted horizontally and 1.2 kW of power.  Very similar to my two 13-element horizontal yagis with 1 kW.

However, Mr. Murphy did not just pay a visit to C8T, he actually moved in it seems!  On their first morning they found they did not have the electrical power they were promised.  They only had one 10-amp circuit instead of the three 80-amps they were supposed to have.  The owner of the lodge did fix that though and the electric company came the next day with the new circuits.  But, Internet access wasn't stable enough for them to use their pre-programmed software to upload their QSO's every minute.

However, the problems did not stop there.  When they connected all their systems to the power, ALL the laptop power supplies, one laptop and a K3 DIED because of the high voltage!

Problems continued for a bit with their RTTY software changing frequency unexpectedly.  And, they then decided to move the EME station down to the beach where they could see the moon from horizon to horizon.

The next day just after the grey-line they started well on HF but the entire city had a power failure!  The lodge owner brought them a rented generator but it was not big enough to run their amps. 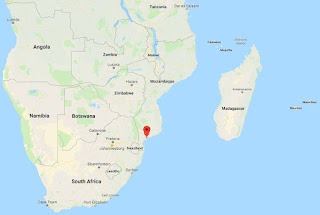 Because of their location on the East coast of Africa, we only have about 3-1/2 hours a day of "common moon" between Mozambique and West Virginia.  The first day that was from 2:20 a.m. to 6:00 a.m. my time.  I did not really plan to be on for that moonpass because the Degradation was 4.3 dB and would get better on subsequent days.  However, I had a case of Montezuma's Revenge so I turned on the station and monitored for about 3 hours between trips to the Porcelain Facility.  Nothing was seen on my screen from C8T.

The red marker on the map shows their location in Praia Do Bilene, Mozambique.

Then after reviewing their logs they saw it was very difficult to work NA on HF even when conditions should have been favorable.  They felt this might be because they were on the south-side of a hill so they got permission from the property owner of the hill to move their 5-band Spiderbeam to the top of that hill.  This location was 120m further away and 50m higher.

The next night (Monday) I could not be on because my wife and I were going to be Poll Workers for the primary election and had to be at the polling location by 5:30 a.m. Tuesday.

Thankfully ON4AOI was sometimes in telephone communication with the DX'pedition and could post on the EME Chat Page information like the following.  Each line is an individual post over a few days.

Correct Petter. Marc his radio jumps sometimes 30-40 hz up/down after every seq, must be heat
wind is playing with ant at C8T
looks wind is blowing them of moon now
C8T has power cut in all village. just got Marc on phone
Just got the news that they have qrm from HF stations so patience sometimes is needed
qrm from HF today is a problem
I cant reach them either now not even via cellphone
not cfg yet but think C8T again powercut
they are aware of the shift but no solution found yet
They will cool down the kx3 with ice now looks a thermal problem


As you can note above, C8T was having trouble keeping his TX on frequency.  Possibly due to the heat at his location he would jump 30 to 60 Hz up or down after each sequence and sometimes it could be 200-300 Hz different from his last transmission.  Many of the people who had copy on him were complaining of the difficulty of finding the "moving target."

After working a 16-hour day at the election polls on Tuesday, I hit the sack early and got up at 3:25 a.m. Wednesday to look for C8T.  By 6 a.m. I had not seen even a trace from C8T and this was due to the city-wide power failure.  It was beginning to look like a serious problem because I could see on the Chat page that C8T was indeed working stations - I just could not see him.

On Thursday, I set my alarm for 3:55 a.m. but did not actually "come to" until 4:30 a.m.  Rats!  Still I was on the moon in just a couple of minutes and was looking hard for C8T.  It was not until 2 hours later that I decoded the following:


WOW!  I had actually copied C8T on 2-M EME.  But, that was the ONLY decode that day.  I stayed on the radio until 8 a.m. with only that one decode.

By this point, I have invested 9 hours (over three nights) in front of the radio with only a single decode to show for my effort.  Plus, I'm getting a little punchy from lack of sleep.

During my EME operations on Thursday morning I noticed I was having problems with my Elevation rotor.  Turns out the crossboom had slipped in the rotor.  Tim, K8RRT, came by at 7 p.m. and we managed to re-position the system and tighten down the rotor clamps.  We did this once before so maybe I need to "pin" the rotor to the crossboom.  In any event, thanks to Tim's help, I was ready to get back in the hunt for C8T.

Thursday night I set my alarm for 4:30 a.m. to try again for C8T.  Again, I saw nothing until just over three hours later when I got my next decodes from C8T:

Since I was copying him, I started calling C8T at 1149 GMT just after he sent W8KEN the first "RRR" above.

Seven minutes later when I copied my call and "OOO" report from C8T, I nearly wet myself!

WHEEE!  I really did manage to make a QSO with C8T for a New One!

This QSO took a little more than 12 hours of my time in front of the radio to complete!  Part of the problem was knowing that C8T had such difficulties on his end that I never knew if my monitoring was useful or if he was off the air due to power failures.  Part was the size of his station and mine and that we were both horizontally polarized.

I continued to stay on his frequency for a half hour after our QSO and decoded NOTHING more!  But, what I did decode was enough.

Also that morning LA8KV and WP4G were on the moon.  Both would be New Ones for me but I did not see them the times I looked.

Besides working a New One on EME, this QSO taught me something about my EME capabilities.  In looking at the fact that I only saw C8T Thursday when my Azimuth was 127° and not at all on prior days, I think the trees to my East are now blocking a good bit of my EME signals and the antennas now have to nearly clear them for me to copy weak signals.  At 132° Azimuth (where my antennas were pointed when I copied C8T calling W8KEN Friday), one antenna can see the moon clearly and the other is still partially blocked by limbs and leaves.

When I began EME operations on November 1 of 2017, the trees were bare and the sap was gone.  Now that summer has come and things have "greened up", the trees are severely limiting my ability to work EME toward my East.  Unfortunately, that is where most of the EME stations are located.

There are no new DX'peditions on my radar until August 31st when PQØF is scheduled to start up from Fernando de Noronha.  I will have plenty of moon past the trees to work them.  But, other DX'peditions might surface during the summer.

Still there are many entities in Europe that I have not worked.  Hopefully the tree blockage won't cause me to miss too many. 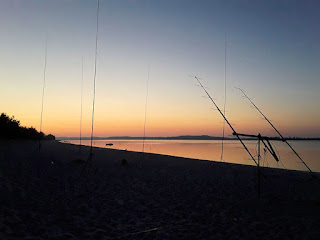 The day before they posted this:

Day 6: nearly 11000 qso's in the log. Propagation is not with us, some rare openings towards EU and JA this afternoon, NA and SA still difficult. FT8 expedition mode is helping us out😉. EME on 2m on the other hand is a big success , nearly 200 contacts so far, the vast majority ATNO! By tomorrow morning, the 300 mark will be made.
Another try on 160m tonight - watch the cluster.


Packing up EVERYTHING you will need for a DX'pedition and traveling thousands of miles to fight the weather, bugs, power outages, and all the other problems takes a HUGE amount of effort.  Please remember that when you are having trouble making a QSO with people who are doing so much to provide you with the opportunity of a New One.

Saturday morning, I was able to copy a CQ from C8T at an Azimuth of 106° which is pointing fully through the trees!  I would need to move the Azimuth a good 20° to the right (West) to get at least one antenna clear of the trees.  However, I listened for another 2 hours and did not decode anything else.

This may have happened partly because C8T overnight changed the polarity of their antennas from Horizontal to Vertical.  Plus, the moon might have been in a bit of a "gap" through my trees at that particular time because I did not get another decode.

Still, it shows what difficulty you can have working small stations via EME from another small station.  I spent 12 hours looking for him when he was horizontally polarized and only managed to decode him 6 times!  Of course, most of that 12 hours was spent looking through the trees.

GOOD NEWS!  My call showed up in the online log as the last person C8T worked Friday!


By changing the polarity of their antennas they are doing all they can to see that they work the most people.  As of my QSO Friday, they had logged 244 stations on 2-M EME. 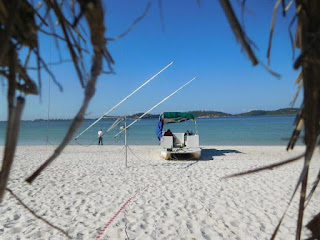 C8T UPDATE & NEWS
They are trying to solve the freq jump by adding an external blower on top
of the open Rig (:
Marc told me that it seems to be better (tests were done after MS) but in
full sun at 35C it still is unpredictable.

Here is a photo that shows their 2-M EME operating position! Yes, that is a BOAT where they are operating the moonbounce station.

We can only imagine what the operators at C8T are going through to put this entity on EME.  It is Africa after all, they are close to the coast so there have to be bugs, mosquitoes, lizards, spiders, oppressive heat and humidity, rain, storms, wind, etc.  This "operating position" for their EME station is interesting to say the least.  All I can say is WOW!  Since I have done a few DX'peditions myself I have some first-hand knowledge of their situation.  This makes my QSO with them worth so much more.

Click on any photo to see a larger image.

This QSO brings my 2-M EME totals to the following after less than 6-1/2 months on the moon: