One MORE Good Night on EME

Well, the degradation was -1.8 to -1.9 dB last night and I thought I would like to see how that affected my EME activities.  It did seem to have an effect but did not stop me from making 16 EME QSO's between 0510 and 1130 GMT.  That meant I did not get INTO bed until just after 7 a.m.  I need for the moon to be good during my daytime once in awhile so that the DX has to stay up all night!

Below you can see a screenshot of my log covering last night and a couple of days before.  The Green Highlight on G8BCG indicates that I sent him a paper QSL.  Click on any image to see it larger.

I looked for TF3T a couple of times while he was calling CQ but I saw nothing.  I did copy LU7FA quite well and called him several times but all I got was a single "QRZ" from him.  That would complete my Worked All Continents (WAC) by giving me South America so I'll keep watching for him.

During most of the night, a lot of the stations I worked or tried to work would say they were copying me but I did not copy them.  Or, the reports I got were several dB better than those I gave by as much as 12 dB.  This one-way propagation can be frustrating for sure.  Like when I ran with SINGLE yagi station OK1TEH for more than 1/2 hour and I copied him FOUR times as strong as -22 dB:

But, he got zippo from me.  He said he was seeing my trace but did not get it to decode. He told me he had trouble with "city noise" at low elevations.

At times I did feel like I was rare DX with all the traces I could see from stations answering my CQ's: 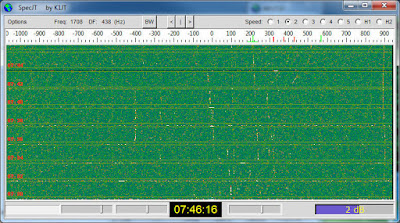 Even with the higher degradation, it turned out to be a productive night on the moon in terms of making Initials and Grids but no new DXCC's happened.  Last night I raised my EME totals by 16 more QSO's, 16 more Initials, and 10 New Grids to:

Amazingly I have averaged 2.9 QSO's per Day since I got on the moon 40 days ago!  Before I got operational, I would have bet big money that would not be possible.  Heck, I didn't even know there were as many stations active on 2-M EME as there seem to be.  I keep expecting to "work out" all those who want to work me but right now, this is so much FUN!

At MR (MoonRise) tonight the DGR (Degradation) is 3.0 dB and continues to rise for the next week.  It doesn't look reasonable again until Christmas.  So, I guess it's time to get caught up on other things for the next two weeks. How will I stand it by not being able to make more EME QSO's?

Another GREAT Night on the Moon!

For about a month I have been trying to work a station in England (G4TRA) who is running a single 11-element yagi and 400-watts.  Now that's what I call a Pretty SMALL station for EME.  Still, he has had a good deal of success.  On 2-M he has achieved WAC, and worked 62 countries and 473 Grid Squares since 2014, using a 30 year old TS790E and that little 11 element antenna.  NOT TOO BAD!  That just shows what you can do with perseverance.  With that small antenna and no elevation provision, he is limited to working at his Moonrise (MR) and Moonset (MS.)

Over the last month I have run schedules with him about 3 times and have watched to see if I could copy him while he was running with several others.  On November 10th I copied a full CQ from him and tried to answer but we did not complete although he copied me quite well.  So, I looked at the Sked Maker part of the MoonSked program and determined that this morning, Thursday, December 7, from 0930 to 1110 GMT looked like a very good chance for us to work.  Degradation was shown to be only 0.7 dB and the Maximum Non-Reciprocity (MNR) between the two of us moved from 2 dB down to 0 dB.  That made me think we could possibly work under those conditions.  So I told G4TRA that I would be looking for him at that time.

Once my moon came up last night, I got on the air to see how the conditions were.  First I saw YO3DDZ calling CQ and worked him easily for a New DXCC.  I also made contact with ES3RF for another New DXCC (which has already been confirmed on LoTW.)  Then, I ran two or three different times with F5AQX and he copied me fine but I never got a peep from him.  He copied me as good as -17 dB and I could not even see a trace from him.  Finally, when his Ground Gain kicked in, we made the QSO.  That's another New DXCC for me for a total of THREE New DXCC's last night.  Also, yesterday morning I had gotten up a little early to run a schedule with VK5APN and worked him for a New DXCC as well.  That's FOUR New DXCC's in one day!

That success pumped me up and I kept operating until the point where I realized there was no use in my going to bed if I had to get up at 4:30 a.m. EST (0930 GMT) to run the schedule with G4TRA.  As it turned out, I stayed up for a total of 23 hours to continue playing with the Moon.

During the night (not counting the 3 QSO's I made on Friday morning) I completed 17 EME QSO's.   Among those QSO's I worked DL1VPL who was running a SINGLE 12-L yagi and 750-watts, G8BCG who was running a SINGLE 12-L LFA Yagi and a kW, and I DID complete with G4TRA and his SINGLE 11-L yagi and 400-watts.  That contact with G4TRA is certainly the SMALLEST station I have worked via EME.  All together, that makes THREE Single Yagi stations I worked last night!  It looks like the calculations in MoonSked are pretty accurate when planning for working EME.

Below is a list of the 17 stations I worked last night.  Click on any image to see it larger. 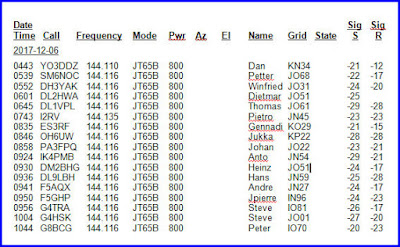 That evening (Thursday) I did not plan to stay up all night again [grin!] but I had seen that HSØZIL from Thailand had been on the moon before I turned on the station Wednesday night.  I saw that he was supposed to come back the next night and I figured I would watch what happened with the pileup I expected to occur.  Just before my moon came up, HSØZIL announced that he was calling CQ on 144.120 MHz.  I tuned to that frequency and looked up what MoonSked had to say about conditions between him and me.  It said there was a Maximum Non-Reciprocity (MNR) of 9 dB between us which is a LOT.  Add to that I saw that he was running 2x9-element yagis horizontally polarized.  That pretty much (to my mind) said there was not a chance I could see him.

Well, imagine my TOTAL SURPRISE when just before my moon elevation reached 1° (that's ONE DEGREE above the horizon!) that I copied:

Say WHAT?  Because I just KNEW that I had no hope of hearing him, I had not even turned on the amp.  I about broke a fingernail snapping on the amp and waiting for the DC supply to power up.  I started calling him about 20 seconds too late so I didn't figure anything would happen.  His next transmission I did not decode anything but I still called him the following minute.
Then, I nearly fell out of my chair when he came back to me!  My moon elevation was just 0.72° at that time!  Since the moon is about 1/2 a degree wide, this means the moon had just barely cleared the horizon for me.  AND, at that heading, I'm shooting directly through the trees behind my house!!

The QSO proceeded in straight sequences and in just FOUR minutes, I had snagged a New DXCC and THAILAND at THAT!  I'm shaking just typing this.  Below is the screen shot of the QSO: 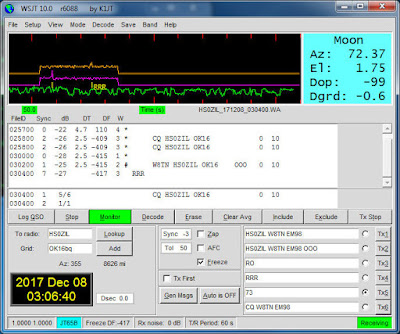 Finally, just to put the icing on the cake, I woke up early on Friday morning for a bathroom visit, checked the Chat Page, saw G4PLZ calling CQ and managed to easily work him for another New Initial.  Then, I got a report from a VERY small station, GM4VVX, who had copied me when I was working G4PLZ.   We decided to run and very quickly I copied calls and his grid.  Two periods later I copied the "RO" and I started sending "RRR."  But, I never decoded anything again even though I saw the very faintest of traces where the "73" should be in the waterfall.  I kept sending the "RRR" as once GM4VVX received that, it would complete the QSO even if no "73" were sent or received.  I never saw anything from him on the Chat Page so I continued sending "RRR" until his moonset.  I sent GM4VVX an email and got his response a few hours later that his Internet had failed due to heavy snow showers and frost at his QTH.  He did indeed receive the "RRR" and sent me the "73" so the QSO was complete.  Clive, GM4VVX, now becomes my smallest station I have ever worked as he runs 400-watts into a SINGLE long spaced 10-element yagi with a SSB2000 masthead pre-amp and no elevation!  WOW!  Simply amazing to me that I can work stations that small under good conditions.

The EME QSL Cards have ARRIVED! 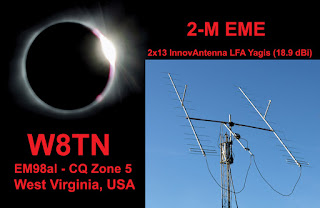 I felt that I needed to create a special QSL card for my EME contacts.  In the past I have used Gennady, UX5UO, with great results so I sent him an email with my idea for a QSL and he cleaned it up nicely and emailed me a proof in just over FOUR HOURS!  WOWZER!

I made the PayPal payment the next day and TODAY, a mere 22 DAYS later, the Postman brought me a package with 1,000 exquisite QSL's direct from the Ukraine!  What service! 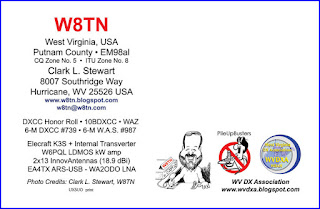 You can see the Front of the QSL on the left.  The "Diamond Ring" photo was taken by me on August 21, 2017, in Sweetwater, TN, during the Total Solar Eclipse.  I felt it would make a nice EME QSL so I put that photo on the QSL along with the photo of my antennas.

You can see the rear of the QSL on the right.  The blank space at the upper right is where I will computer print the QSO information.

Click on any of the photos to see a larger image.

You can visit Gennady's web site by clicking on this link "UX5UO Print".  I am not connected with his company in any way but am definitely a VERY satisfied customer.