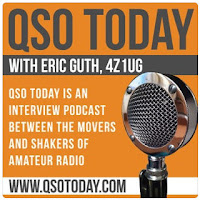 QSO Today is an audio podcast created by Eric Guth, 4Z1UG / WA6IGR.  It consists of audio interviews with hams from around the world.  As the host of the QSO Today Podcast, Eric poses questions to those being interviewed about their own personal ham radio story.  He asks questions about how the person being interviewed got started in ham radio, about their first rig, their Elmers, about what affect ham radio has had on their career, their family life, what they see as the most exciting aspect of ham radio today and a host of other things.

Each interview runs about an hour and can be listened to online or can be downloaded on Apple Podcasts.  Episode 200 is an interview with Eric himself as the subject.  All prior episodes can be accessed and a list of all the interviews is available HERE.

Eric has been doing this for 4-1/2 years as a way to document the stories and ham radio history for hundreds of individuals in our hobby.  As of today, November 23, 2019, Eric has produced 277 episodes.

Today's Episode 277 is with me, W8TN. The interview was conducted over Skype on November 10, 2019.  The image at the right is from the Skype app during the recording.

Using the embedded player below you can listen to this Episode right from this Blog. Note there are buttons to rewind 30 seconds or skip ahead 30 seconds. 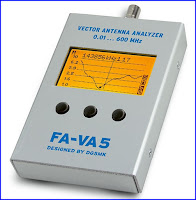 Many, if not all, logging programs have the ability to connect to a PacketCluster server to obtain DX spots.  However, if you want to control the spots that are coming into your logger, you need to issue archaic DOS type commands.  VE7CC has created a program called "CC User" which resides on your computer and easily allows "mouse click" changes to the spot information which is displayed in your logger. 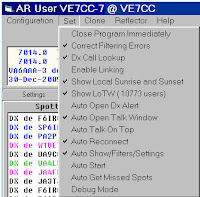 This software, which you install on your computer, allows you to connect to the VE7CC PacketCluster or any other cluster you want.  You then connect to the "CC User" program from your logger.  "CC User" has the advantage of being able to supply spots to other programs like contest loggers (N1MM+ for example) at the same time.  Or, if you have other computers in the house, you can connect to the "CC User" program on your main computer and save on the usage of your Internet uplink/downlink while maintaining the settings you have created for receiving spots.  Plus, there are tons of ways to filter the spots coming from "CC User".

One of the main reasons I started using the "CC User" program a few years ago was that you can tell it to "Auto Reconnect" if the link to your chosen PacketCluster fails.  And, not only can you reconnect if you get dropped, but you can also automatically pull in all the DX spots you missed.

CLICK HERE for the page describing all the features of "CC User."  It is free software.  Once on the CC User web page, scroll about 2/3 of the way down the page to find the "Installation of CC User" instructions.  Under that heading you will find the link to download the program: "Download CC User Full Version (ver 2.421)"   Clicking on this link will allow you to download a ZIP file.  Just Un-ZIP and proceed as you normally would with any program installation.

There are tons of ways to filter the spots with just a mouse click (instead of sending an archaic DOS command to the Cluster.)  For example, on the top left of this Post is a window showing how easy it is to reject spots from certain bands. On the right is a snapshot of the screen where you can filter the station sending the spots, not only by country (as by telling it you only want to see spots from the USA) but you can drill down and filter only spots from a particular STATE or PROVINCE.  Again, on the left, is a screenshot of the "Set" menu with just some of the options available available in "CC User."  Click on any image to see a larger view.

On the right is a "Tab" in "CC User" which I use often.  The screenshot is captioned "DX Tab."  Say I'm trying to work a station that I see spotted on 40-M.  But, the most recent spot only says "UP" with no indication of how far up he is listening or, the spot does not even SAY UP, it just gives the DX station and frequency.  So, I click on the DX "Tab" of "CC User" and select "40" for the band and I can then see all the spots that have come in on 40-M in chronological order.  I can then scroll up through the spots and look for any spots with good info for me.  Check out the spots for T33C on the "DX" tab screenshot and you can see what I mean.  Using this will also help me find spots with comments giving QSL information or the fact that the DX station changed bands, etc.  Your logging program may only show the most recent spot which may not give you this info and trying to scroll back through all the spots for all bands to find any useful info is a PITA and usually unsuccessful.


If you are serious about getting your spots or have questions about certain PacketClusters, you can run multiple instances of "CC User" to test various Clusters and answer questions like:  Which node should you connect to? Which nodes are faster? Are you missing DX by connecting to a certain node? Does the "Get Missed Spots" really work?  Just set up multiple instances of "CC User", connect to various nodes, and compare them side-by-side.

When you setup "CC User" you need to look at the "Port Setup" screen like what is shown next on the Left.  I've marked in Red the part that deals with your connecting to "CC User" from your Logging Program.  If you are going to use Telnet to connect to your logging program you can ignore the settings for RS-232.

To enable this connection in the Logger32 logging program, Right-Click in the Telnet window of Logger32 and choose Setup | Setup remote hosts.  You should then setup a remote host to look like the screenshot shown on the right for "Telnet connection setup..."

This may seem like a lot of work just to set up a source for PacketCluster spots but, for me, the other benefits of the "CC User" program are well worth the effort.  I let my computer run 24/7 and "CC User" is always running.  I may shut down and later re-start Logger32 but when I do, my VE7CC-1 Cluster is always there.