This has been an especially snowy winter for us. In December I think I spent about 4 HOURS shoveling snow or blowing the powdery snow off the driveway (and doing that with my broken leg and cane was a challenge to say the least!) The leaf blower worked rather well up to about a 3-inch snow fall as long as it was very cold and the snow was dry. However, we did get one snow of a little over 12-inches and that was just too much to shovel. Thankfully my neighbor (the contractor who built our house) came over and plowed the driveway with his 4-wheeler. 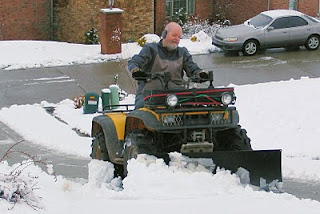 Right after that, Tim, KC8UHE, was by the house and mentioned that he had a 4-wheeler that he only used for hunting and now that hunting season was over, I was welcome to borrow it. Tim made that offer on a Wednesday afternoon and we were aware that another big storm was due the next day. So, on Thursday morning I drove to Charleston and bought a snow blade to fit Tim's 4-wheeler. I then picked up our utility trailer and went to Tim's and loaded the 4-wheeler. Back at our house, our son, Darren, KC8QGV, came and installed the blade. It began snowing while he was doing that and by the time the blade was installed we had over an inch and Darren gave it a test drive.

At this point I've used the snow blade 4 times including the 2+ inches of heavy wet snow we had today (see photo - click on photo for larger image.) Twice I've also plowed the driveway for the neighbor on the other side of our house. This tool is totally the "berries." I'm going to have to buy one before Tim needs his back for hunting!