Improvements to the 160-M Antenna Farm

Today the weather was great and I decided it was time to get back on a couple of antenna projects that had been waiting patiently for a long time. After having breakfast at Shoney's with Charlie, N8RR, I decided that I needed to upgrade the 160-M Inverted-L with the addition of a 2nd elevated radial. At the same time I planned to take care of an issue that I first noticed when the grandsons helped me string the reversible Beverage toward Japan. 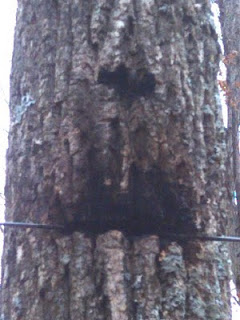 The "issue" was that I noticed the elevated radial had come in contact with a tree and the RF had found a path to ground through the tree and burned a patch on it about the size of my open hand! In fact, the tree is about 5 inches in diameter and the radial had actually burned itself into the tree to a depth of about 3/4 inches. You can see in the 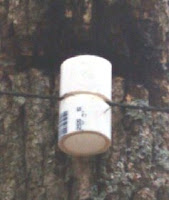 photo at the left that the insulation had burned off the wire and actually a couple of strands of the wire had burned apart or broke from friction once the insulation was gone. It's a wonder I've been able to work anyone with this going on. The location of this damage is about 25 feet from the far end of the radial. It appears that when you push 1,500 watts into a piece of wire, it had better be well insulated or that power is going to go somewhere besides out into the ether!

I manufactured an insulator out of a piece of 1-inch PVC (see photo at right) and installed that at the place where the damage was located. I then wrapped the insulator and wire with Scotch 88 electrical tape. It turns out I really did not have to do this because as I moved on to the end of the radial I saw where some limbs had fallen against the radial and they had pushed the wire over against the tree. Once I removed the limbs, the wire moved away from the tree on it's own.

I then proceeded to add an additional radial to the Inverted-L. On my first trip away from the feedpoint I pulled out some new wire and measured the new radial so that it would be the same length as the first. I had attached the new radial to the original radial by using a split-nut. Back at the feedpoint I tried to make my way through some heavy brush to pull the radial on a Southerly path. However, I soon found that I did not have enough Real Estate in that direction so I had to come back and take the radial off in another direction. I only went a few feet in the new direction before I realized the angle between the old and new radials would be fairly small and I felt I needed something nearly opposite the original one. So, I reversed direction and headed off to the NW. I had also pulled a second wire because I had planned to put three radials on this antenna but I was short about 33 feet on the balance of that spool and did not have enough room to put it up anyway so if I was going to end up with just 2 radials, I wanted them as far apart as possible.

Once back in the shack I ran a plot on the 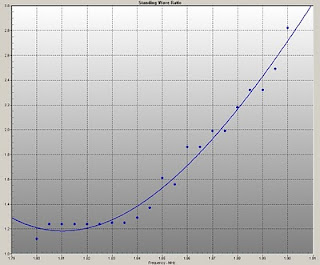 After the antenna was taken care of it was time to finish the installation of the reversible Beverage that the grandsons helped me string up THREE months ago. DUH! I'm not the speediest guy around that's for sure. Anyway, the new 2-direction Beverage joins the other single wire (North) Beverage and the original 900-foot reversible Beverage (NE/SW) so that I now have 5 directions I can listen with Beverage antennas. I will be up tomorrow morning to see if the new Beverage improves signals toward the NW.

This operation took a total of four hours and I'm pretty sore now. And, as I write this just 3 hours after completing the project, I can hear thunder and the rain has already begun. However, I got it all done, didn't break anything, and it looks like the effort may be worthwhile. Only time and pileups will tell!