Beverage (Antenna, That is!)

With Charlie, N8RR, having FOUR Inverted-L antennas for 160-M, he is hearing a good deal better than I. He has worked ZD8UW a couple of times and I can barely hear that station (and have no QSO's!) So, I decided to put up a Beverage antenna aimed at ZD8 and began to gather together the parts. Thankfully I had almost everything I needed. I had previously acquired the 9:1 transformer, pre-amp, and miscellaneous small parts from Lance Johnson Engineering. I had intended to put up a Beverage last fall but just had not gotten around to it. 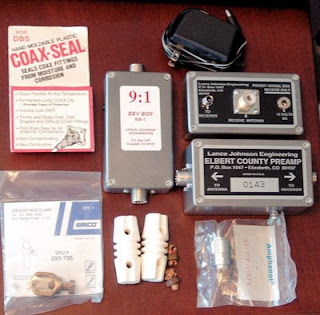 You can see in the above photo (bottom row) ground rod clamp, insulators, split nuts (to connect the "Ground Drop" and "Feed Drop" wires, and a coax connector. I had to make a run to Radio Shack for a barrier strip, some spade lugs, and a couple of 1-K, 1-watt resistors (put in parallel they give 500 ohms.) That was a "guess" at the termination resistor. Later I'll fine-tune the antenna for the best Front-to-Back and put the exact value resistor there. 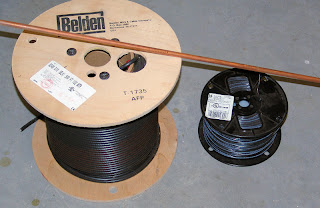 I had also previously purchased 500-feet of RG-6 coax and 500 feet of No. 14 solid copper insulated wire. I had a couple of 4-foot ground rods in the garage (one shown above) and only need to pick up a couple of ground rod clamps, some extra split nuts (in case I dropped one) and a new needle nose/wire cutter that would handle No. 10 wire. I had some No. 10 wire that I planned to use for the "Ground Drop" and "Feed Drop."

I then set about adding an additional 45-feet of No. 15 to the 500-foot spool as I was shooting for a 540-foot Beverage. Then I put spade lugs on the "Ground Drop" wire so I could easily connect it to the barrier strip where the termination resistor would be mounted. I soldered the two resistors together and to some spade lugs so they could be easily mounted. I installed a PL-259 on one end of the RG-6 and I put another PL-259 on the "Feed Drop" so I could easily connect it to the 9:1 transformer box.

After all this "prep" work, I put on my warm coat and loaded myself down with a canvas bag containing my tools, electrical tape, the prepared "Drops", the transformer, the pre-amp, spare gloves, compass, drinking water, etc. I then hung the 545-foot spool of No. 14 over the other shoulder. I stuck the two ground rods through my belt on one side and put the sledge hammer through my belt on the other. I then picked up the 500-foot spool of RG-6, several dowel rods I planned to use to support the wire (along with electric fence insulators that were in the tool bag.) And picked up my lightest step ladder and headed for the hill behind the house.

Some of you know how steep that hill is. Of course I was not able to make it down in one trip, loaded like a pack mule. I had to ferry some of the stuff down and come back for the rest. I should note that the "prep" work took a lot longer than I had planned and it was 4:30 p.m. as I descended the hill.

I quickly picked a sturdy tree to serve as the "hub" for my future "Beverage Farm" and, using the step-ladder, climbed up and secured one end of the Beverage. I then used the split nut to clamp the "Feed Drop" to that end of the Beverage and connected that to the 9:1 transformer box. Later I would connect the transformer to the pre-amp with a short length of RG-8X coax.

It was now after 5:00 p.m. and I was starting to lose the light. So I took a heading with my compass and took off into the woods. This was where the adventure began. I walked, and walked, and walked (ALL DOWNHILL) and played out the Beverage wire as I went. I utilized local supports (tree limbs, bushes, etc.) to support the wire, stopping every so often to take a new bearing. As I got within about 75-feet of the end of the wire, I ran across a place where three large trees had fallen. I had to climb over the fallen trunks and make my way through very think brush to reach the end of my trek.

At that point I had a nice tree for the end support but had to cut off about 10-feet of the wire. I had not been able to drag the step-ladder with me so I just tied it off as high up as I could reach. Here is a photo of the "front" end of the Beverage. 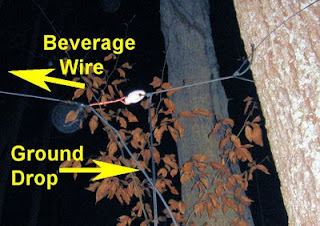 Yep, it's kinda dark out by now. In fact, I had to hold a flashlight in my mouth in order to do all the work at this end. I then connected the "Ground Drop" with another split nut (covering the connection with Scotch 88 electrical tape) and then used the sledge hammer to drive in the two ground rods about a foot apart. I connected the previously prepared ground wire with the spade lug to the ground rods and the spade lug end was connected to the barrier strip with the terminating resistor (the other end of the resistor was connected to the "Ground Drop.") Below you can barely see the tops of the ground rods and the ground rod clamps with the No. 10 wire connecting them. 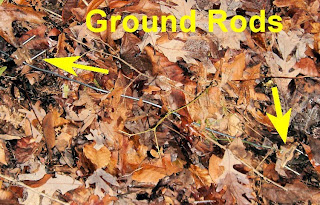 Now I drank one of my bottles of water and took a breather before gathering up my tools and heading back. Here is where I began to think I might be out here for awhile. I could barely see the lights from my house and they looked like they were at a 45° angle from me!! Man that hill looked steep. But, I knew I had to trudge back up it and I was certainly thankful for both the flashlight and the fact that I had the Beverage wire to follow! Without that, I might STILL be wandering around down there.

It took me 25 minutes to cover that 500 feet back to the Beverage hub. I quickly connected the pre-amp and began laying out the RG-6 cable back toward the house. I had now made it back to the "haul road" behind my house, just 250 feet from my garage (but about 100 feet in elevation!) My wife, Evelyn, had called me on the cell phone 4 times by now, concerned for my safety. At this point I used the flashlight to blink at her so she could see where I was in the dark night.

I finally made it back to the top of the hill but it did take two trips to get the ladder and tools up and the RG-6. As you can see by the next photo, I did my best to insure that the antenna would play by shedding a little blood on it! 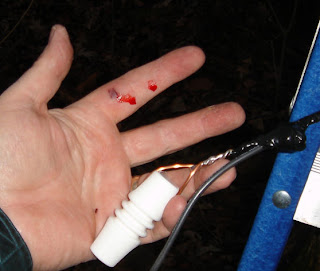 At the house (after I put away the ladder and tools) I connected the RG-6 to a PL-259 and put that into the "Power Signal" box that sends the DC voltage down to the pre-amp and returns the RF signal to the receiver.

Now comes the point in this treatise where I expected to be able to tell you that I could hear the ZD8 just like a local. However, that is not the case. The antenna seemed to not be working at all. I was crushed. I had been "over the hill" for more than 3 hours and it was nearly 8 p.m. I had spent all day on this project and had nothing to show for it.

After making what tests I could, I called Steve at Lance Johnson Engineering and he walked me through some tests that finally resulted in my replacing the cable that ran from the "Power Signal" box to the remote antenna jack on my transceiver. The first cable I had used was apparently faulty. The antenna now seemed to work but the ZD8 was not on 160-M. He was working SSB on 75-M. So, I tuned up there and worked him as I still need a confirmation for that band.

I guess I'll just have to wait for tomorrow evening for him to come back on 160-M to see if all my work will pay off. It's 2:15 a.m. now and I'm so tired and sore that I will probably sleep till noon. I'll post here again with the results of the antenna's performance once I determine what that is.