This post is a little late but here we go.  I had originally planned to use a Hy-Gain TailTwister rotor that I already had on-hand as my Azimuth rotor for the EME array.  However, as my project progressed, I became aware that the TailTwister was not a good rotor for EME use because of its braking system.  When the rotor stops rotating, the wedge brake seats into one of 60 segments spaced 6° apart.  That severely limits the pointing accuracy of the rotor.  Depending on exactly when the brake is engaged, I could be as much as 9° off the exact heading which I needed in order to be directly aimed at the moon.  Since I was only planning a 2 antenna system, I did not feel I could give up that much accuracy.  I need everything in my system to work as well as it possibly can.  So, I scrapped the idea of using the Hy-Gain TailTwister (T2X) and bought a new Yaesu G800-DXA for the azimuth rotor. 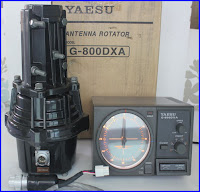 I purchased the Yaesu G-800DXA Antenna Rotator new from GigaParts and received it on March 8, 2017.  Since it was a Brand-New unit in the factory box, I "assumed" that it would work properly out-of-the-box.  WRONG!

When I first un-boxed this rotor and started going through the setup, I noticed a problem.  When rotating it clockwise, at about 130° it suddenly reverses direction, speeds up, goes back to about 105°, reverses direction again and runs up to about 165° where it goes back to normal speed.  All the time this was going on I kept the Clockwise button pushed.  This is totally repeatable.  It did the same thing every time.  Also, when moving counterclockwise, it does the same "back and forth, speeded up" gyrations but not at the same headings, just in the same quadrant.

It is interesting to note that the rotor itself does NOT change direction.  It continues to rotate in the same direction at the same speed.

As I noted above, the rotator motor unit continues to turn normally but the readout behaves erratically as the video above shows.  This erratic display of the azimuth heading is also communicated from the Yaesu control box to the EA4TX ARS-USB rotor controller.  I can only imagine what that controller would try to do to compensate for this crazy display of the beam heading.  So, I called Yaesu Technical Support for help.

I started talking to Yaesu about the problem on May 3rd.  I think I made about FIVE telephone calls to Yaesu (two were voice mails I left) and had three discussions with their Technician and exchanged a couple of emails.  He gave me several things to try in order to diagnose the problem which took up about 10 hours of my time.  Finally, he determined that both the rotator and control box would need to be returned to them for Warranty repair and I shipped it to them on May 10th.

It cost me $36.40 to return this BRAND-NEW rotator to Yaesu for WARRANTY repair!  But, under the terms of their warranty, they are not responsible for return shipping to them even though the rotator was bad when they supplied it.  At least they repaired it under warranty and paid to ship it back to me but I would have had to pay extra for any insurance on the return shipment.  I guess money is tight everywhere!

I called Yaesu Customer Service after the rotor was returned to find out the problem.  The tech said it was a bad potentiometer.  He agreed that it was a problem during manufacture since I bought it brand-new and just opened it up and checked it out inside the shack when I first found the problem.

The rotor was returned to me on June 2nd so my project was "delayed" by a month over that BRAND-NEW G800-DXA Rotator that arrived DAMAGED from the factory!  Unfortunately that delay was during the time when I should have been able to work more on the EME project.  And by not having the Azimuth rotor in place, I was not able to build the rest of the project that goes on top of it.

Thus, I have not been making the progress on the EME project that I had hoped to make.  Still, I am moving forward, even though at a slower pace. The Yaesu Azimuth Rotator has now been installed on the Hazer and appears to be completely repaired - at least I can no longer get it to misbehave.

Finishing the Tower Base

Yesterday my friend and concrete master, Tim, K8RRT, came by to remove the form from the base around of the EME tower and do some concrete finishing work.  He had no idea what a nightmare he was facing.  Of course, temperatures were in the low 90's and pretty humid and Tim had just finished a few hours working on Charlie, N8RR's, EME tower! 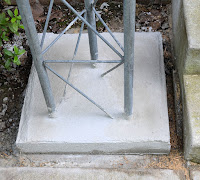 Tim has done this job hundreds of times but this time, the 2x4 frame would not cooperate.  It seems that during the pouring of concrete, some was spilled on one side of the frame, next to the house steps.  When it set up and expanded, that piece of 2x4 was trapped just as if it were in a vise.

The other sides were easily removed but that one 2x4 would not budge an inch.  Tim tried prying it out, chipping it out with a pry bar and hammer, even beating it to death with a 5-foot spud bar.  But, that wood would not move.

I brought out a reciprocating saw and although it did some serious damage to the 2x4, the blade was not long enough to cut completely through the long dimension of the wood.  So, time to bring out the big gun!  My Stihl chainsaw was pressed into service and made short work of removing (and destroying) the 2x4.  (Click on the image at the left for a larger view.)  Tim then mixed up some concrete and smoothed off the surface and edges of the tower base very professionally.

Now I can get my "crack tower crew" (the grandsons) to replace the landscaping rock.  This will please Evelyn that things are getting back to no longer looking as if we are "Under Construction!"


Thanks So Much, Tim!