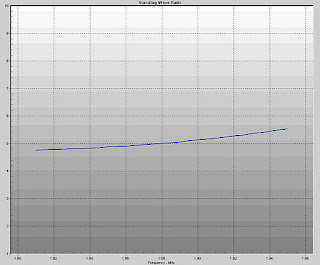 A couple of weeks ago I noticed that I could no longer load my 160-M Inverted-L (nicknamed the Monster-L by Tim, K8RRT) on 160-M or ANY band. Received signals were drastically down from what the 80-M Wire Vertical heard. So, I knew I had a problem. First I thought the vertical portion of the "L" had broken off. But, a trip over the hill revealed that the antenna was intact, just a bit of slack which I removed by tightening the support rope.

That meant I had a more serious problem. So, I put the N8LP LP-100 Digital Vector RF Wattmeter to good use and ran an SWR Plot of the antenna. The resulting plot is shown at the right. (You can click on any image to view it larger, then either "Close" the opened image or use your BACK button to return to this page.) This plot basically says the SWR for this 160-M Inverted-L is almost totally flat across the range of 1.8 to 2.0 MHz at an SWR of about 5:1. That's not good! I then surmised the feedline must be the problem and felt it had to be either Open or Shorted (DUH, now that's intelligent!) A quick resistance check at the shack end of the feedline yielded 0.7 ohms. The feedline was a Dead Short!

Now, how could I figure out where the short was located? I knew I had read somewhere that you could use an MFJ 259-B Antenna Analyzer as a Time Domain Reflectometer (TDR.) If that worked, it would tell me how many feet it was from the shack end of the feedline to the Short. I have never tried this but decided it was worth a shot to see if I could find where the problem was located. So, I hooked up the MFJ-259B to use it as a TDR (after a short Google search to find out how to do it!) First I swept the cable with the 259-B to find the frequency where there was a sharp dip in the Resistance (pretty near zero ohms) and found a big dip at 2.51 MHz. I then applied the following formula:

As I recall, the distance from my shack to the base of the tower is just about 130-feet. So, I now needed to go over the hill and look at the coax at that point. I did that today and about 8-feet short of the tower I found the following: 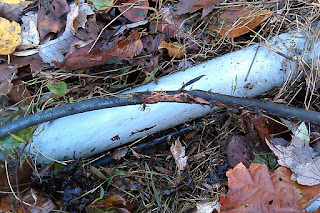 I guess it's not safe to let me work with power tools!
Over the last few weeks I've been clearing brush around the base of the tower in preparation for taking down the SteppIR for repair. I guess I got just a "little" too close to the 160-M feedline with either a weedeater or a chain saw. It was clear that the center conductor was touching the shield - SHORT! 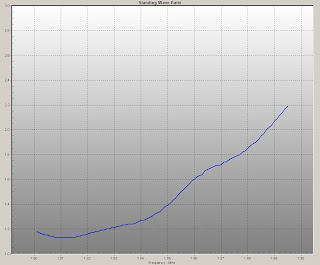 So, I trekked back to the house, acquired the necessary tools, and returned to cut out the bad spot, install PL-259's on each end, and connect them with a double-female connector. Back at the shack, I ran another SWR plot which you can see at the left, and it looks like I'm back in business with the Monster-L! Actually the antenna is resonant about 1.812 and needs to be just a little shorter to move the dip a little further up the band but this is certainly good enough for me.

Next I need to walk all the Beverages with my chain saw to remove any trees that surely have fallen across them. NOTE to self: Take plenty of split-nuts for when (not IF) I cut the Beverage wire with the chain saw. Also, take a First Aid kit and cell phone with 911 on Speed Dial!

A New Ham in the Making

Today my 7-1/2 year old grandson, Grant Kimberling, was home sick from school. After he felt better, he asked me if he could "type" on my keyer paddle. He had done this before and enjoyed sending CW and watching the letters print out on the microHAM microKEYER display. Today he started asking me how to send certain letters instead of just sending stuff at random. What he was asking for was how to send the letters of his own name. After he mastered that, he asked how to send the letters of his brother's name. I soon started the "CW Get" program so that he could see the letters in a more static position instead of while they scrolled across the microKEYER display.

In about 20 minutes he had learned 9 letters and one punctuation mark (he randomly sent "period" and saw it on the screen and kept repeating that until he had it memorized.) Soon I decided to record this event but the battery of the camcorder was dead. I put it on charge and we left to run some errands. More than 2 hours elapsed and when we came back I told him I wanted to record him sending his name and he sat right down and sent it without any questions or help from me. Click on the link below to view the short recording. At the beginning you can see the letters print out on the screen on the bottommost line. You can also click the "4 arrows" icon on the bottom right of the video to expand it to full screen. Then use your BACK button to return here.

Maybe we have a Young Ham in the Making here?

UPDATE: Five days later, Grant came back by the shack and asked if he could show his Daddy what he could do. I hooked up the keyer and he sat right down and sent his name with no hesitation, no mistakes and without any questions, failed attempts or any prompting from me! I guess the "lesson" has "stuck" with him!