Good Day for a "Beverage Hike"

After repairing the Monster-L a few days ago, I decided it was time to inspect/repair the Beverage antennas. Tim, K8RRT, strongly suggested I wait until a Sunday to avoid any confrontations with deer hunters so we decided to make our trek today. We loaded up with a 10-foot aluminum tube (two 5-foot pieces) with a wire hook on the top to lift the wire up over branches, small saw, pruning sheers, chain saw, tape, dacron line, split wire nuts, hand tools and fluids for us. As we hiked along the 60° / 240° Beverage (Reversible), we found some small branches over the Beverage and a couple of forearm size trees that we were able to lift by ourselves. At the beginning the Beverage wire was as tight as a Banjo string and would actually "sing" if you tapped it.

After about 650 feet we found the wire on the ground because 3 or 4 LARGE trees had fallen on it. Some of those were bigger around than me! No sense trying to cut those, so Tim went to the far end of this 900-foot long antenna and removed the wire which I then pulled from under the trees. We re-strung the wire over the dead-fall and now had the Beverage back to its original condition. It was amazing that the 2-conductor wire (WD-1A Military wire) had not broken, as tightly has it had been stretched.

On the way back down the ridge, we heard others in the woods! Tim and I stopped and listened and determined it was just some teenagers playing "Paint Ball." We were within 50 yards of them but I do not think they even knew we were there. Tim was armed with a small, pistol-sized shotgun and we wondered what the kids would do if we fired off a round but we decided to just silently drift away. On the way back to the Beverage Hub, we came back the route of the un-terminated North/South 500-foot antenna and found one or two arm-sized trees on it which we removed.

We completed this inspection/repair mission in less than 3 hours. One more Reversible Beverage remains to be inspected but because Tim had to go to work and I needed some "sit-down time", we elected to stop for today. After sundown, I did a quick "check" of the 60° Beverage to see if it was back being the "Killer" receive antenna it was last year. I've posted two small MP3 files below to show how it plays. Click on the callsign and the file will download or be played in your Browser or by using Windows Media Player or other MP3 player on your computer.

EA8DO - He sends "CQ EA8DO EA8DO" then a station starts to answer him. I was listening to him on the Beverage until he sent "EA" the second time and that's when I switched to the Transmit antenna. You hear him send "CQ EA8DO EA" and then he all but disappears in the noise as I switch to the transmit antenna.

S5ØA is in a QSO with N4NN and you can hear him sending "N N4NN TKS 73" and in the middle of the "3" I changed to the transmit antenna, then back to the Beverage then back and forth once more. It is pretty apparent when he is being received on the Beverage wouldn't you say?

I think our little project today was extremely beneficial. Tonight I can hear TU2T weakly, not strong enough to call, but strong enough to copy reports and portions of the stations he is working. Hopefully he will be on Top-Band near his sunrise as with a little enhancement, I think I can work him.

May I present West Virginia University's Ms. Mountaineer for 2011, Ms. Katlin Stinespring! Click on any photo to see a larger image. 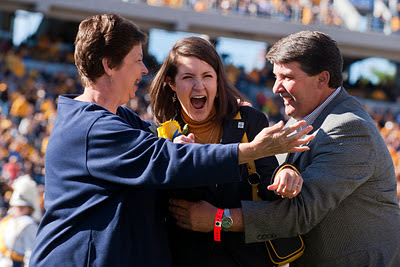 Katlin is the eldest daughter of Tim Stinespring, K8RRT, and is a senior at West Virginia University. She was chosen today from five finalists all of whom are seniors at WVU.

Below is a description of this award: 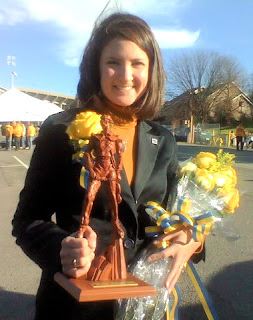 The award recognizes students’ exemplary academic achievement and extracurricular involvement. All applicants must be eligible for graduation by May 2011 to be considered.

Katlin Stinespring, a public relations major, is a Hurricane native and is sponsored by the National Society of Collegiate Scholars. Stinespring is the assistant clarinet section leader and woodwind rank leader of the Mountaineer Marching Band and the vice president of public relations and membership of the National Society of Collegiate Scholars among other activities at WVU. She is the daughter of Tim and Pam Stinespring.

The entire West Virginia DX Association is over-joyed that Tim's daughter has achieved such success. As many have said, it is obviously a credit to her abilities and to the parenting she has received. Congratulations, Katlin, you really deserve this! 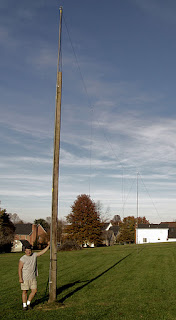 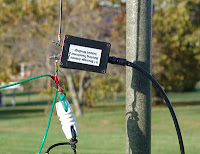