Logger32 has come out with a new Country / Prefix database that is updated to include the four new PJ Entities. You can download the new ZIP'd file from HERE. Click on the last file in the list called "Latest Country Files for Logger32 Version 3.28" and save the file. You will need to extract the 15 files from this ZIP archive to your Logger32 directory. There is also a "ReadMe" file that gives specific instructions on how to install the files. If you do not have Logger32 Version 3.28, now is the time to upgrade to it before you install the new Country / Prefix database. If your version is earlier than 3.27 and you don't want to Export then Import your entire log, you can go HERE and download each individual version upgrade and do them one at a time to bring your version current. Make sure you backup your log first! In addition to the two buttons on the Menu Bar called "Zip Databases and Logbook" and "Zip User Files", I also pull down File | Export Logs and choose ADIF. This lets me save the entire logbook as an ADIF file in case something happens to the one I'm working on.

Once you have Logger32 Version 3.28 with the latest Country / Prefix database files installed, you will need to CHANGE any contacts you made with any of the PJ entities. They will be shown as DELETED countries and you need to follow these steps to change those QSO's:

1. Right-Click on the QSO 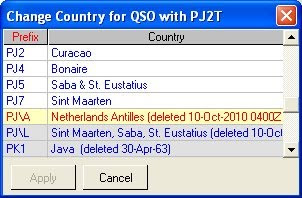 The first time you do this, you will get the "Change Country" pop-up window shown at the right. Click on the heading "Prefix" to put the Entities in Prefix order and that will make it very easy to change all subsequent QSO's. As you can see in this graphic, I am changing the country for a QSO with PJ2T. It is currently logged as "Netherlands Antilles (deleted 10-Oct-2010 0400Z" as highlighted in yellow. All I need to do is to left-click on the PJ2 listing for Curacao and then click on Apply. Simple.

Also, once you click on Apply, the country name may NOT update on the logbook screen. Simply click on the NEXT QSO you want to change and the last one will immediately be updated.

Don't forget to pull down Tools | Database Maintenance and choose "Recalculate statistics" to bring all the stats in your logbook current. Any subsequent QSO's with any of the new PJ's should show up in the logbook correctly. If you track IOTA you will probably need to change those to the correct IOTA numbers which I think only applies to PJ2 contacts with Curacao which is now IOTA #SA-099.

The result of this is that your Worked and Confirmed totals will have been reduced by two (if you had previously worked both PJ entities) and your totals will increase by up to four depending on how many of the New PJ's you have worked.

Yesterday I got up early (for me) and showed up at Tim's (KC8UHE) QTH to help him get ready to install his KD9SV Reversible Beverage. I had purchase the same system for myself at Dayton and Tim wanted to also install one as his QTH does not allow him to put up many long antennas. Using a "Reversible Beverage" means you can cover two directions with one run of wire.

It took us about 2 hours to measure out 330-feet of the WD-1A Military Wire (two conductor) and drill through the foundation of his house to run a new RG-6 coax. I had purchased 1,000 feet of flooded RG-6 cable from DX Engineering at Dayton so we had plenty. (Flooded style cables have the distinct advantage of automatically sealing small accidental cuts or lacerations of the jacket. Flooding also prevents shield contamination and can be direct-buried.) When we left Tim's house, the new Beverage feedline had been run from the shack to the support post in his front yard, connectors installed, and the 330-feet of wire was ready to be strung up after his yard gets mowed for the last time.

After we "fueled up" at Bob Evan's restaurant, we tackled my Beverage project. First we ran FOUR cables through the PVC pipes under the back yard and up into the shack. These were: a control cable for a tower mounted antenna switch (future use), the control wire for the Ameritron RCS-8V remote antenna switch for my new Beverage Farm ($149.95 from R&L), the flooded RG-6 feedline for the Beverage Farm and a 12/2 w/ground AC wire. The AC wire we ran up into the main electrical panel in the garage and I'll connect it to a GFCI circuit breaker and then install an outlet box at the tower. This will allow me to use power equipment at (and on) the tower without running 150-feet of extension cords over the hill. 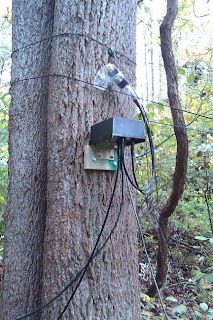 Then came the hard part, running all those wires down over the hill. Tim (thankfully!) did all the hard work there. Soon we had the cables in place and it was time to start hooking things up. In the photo at the right you can see that I mounted the Ameritron remote coax switch to the tree which will serve as the "HUB" for the Beverage Farm. All the Beverages will radiate from this point. This tree is about 200-feet from the shack and something like 80 or 90-feet from the tower.

Above the Ameritron switch you can see where two Beverages are tied to the tree with Dacron line. The upper one is the starting point for the new Reversible Beverage and the lower one is my existing single wire one. The single wire one runs off at about 45° and I plan to move it to about 20°. The new Reversible Beverage will run at 60° and the reverse direction will be 240° which should be good for eastern Australia, New Zealand and southern pacific islands like Pitcairn and Ducie.

On the left you can see the control boxes in the shack. The lower box is the Ameritron control box that switches the different antennas at the Beverage Hub. I can select any one of 5 antennas from the shack by turning the switch. One modification had to be made to the switch and that was to allow the relays to automatically switch in a 75-ohm termination for the unused direction of the Reversible Beverage. Since I could not find 75-ohm resistors at Radio Shack, I had to 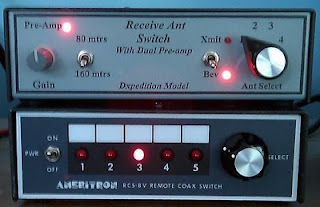 On the top you can see the KD9SV DXpedition receive antenna switch with pre-amp and front-end saver. The feedline coming from the Beverage Hub switch runs through a KD9SV Common Mode Choke to isolate common mode signals that may be picked up on the shield of the Beverage feedline and keep them from affecting the noise floor of the receiver. This receive antenna switch would, by itself, let me switch between 4 receive antennas but you would need to run a feedline for each antenna. The box also contains a receive pre-amp with adjustable gain. And, it has a "front-end saver" to prevent blowing out the receiver's front-end by picking up large signals from my transmitted signal (and other sources.)

Using RG-6 cable for the Beverage feedline was great! Compression fittings are quickly installed (much faster than UHF or RCA connectors.) All the KD9SV Products and the WD-1A Beverage wire were obtained from Radioware & Radio Bookstore. Click on any photos in this post to see them larger and click on any link to see the described product or web site. Use your BACK button to return to this page.

By the time we got all the above done it was after 4:30 p.m. and I knew my tired old body could not walk 880-feet out through the thick underbrush to help Tim string the Reversible Beverage wire. So, we made our way back to the house and called it quits. all that is left it to run the wire and put a ground rod in at the end. Everything else is done. Then, we can move the original single wire Beverage and later I can install any others pretty easy since the infra-structure of the remote antenna switch is now in place.

On Tuesday morning, 19-Oct-2010, Tim, KC8UHE, came to my QTH and we ran the wire out for the Reversible Beverage. WOW, what a hike that was. We already had the wire connected at the Beverage Hub so we went down over the hill to that point and began running the wire on a heading of 60°. I would take a compass reading and pick out a landmark for Tim to walk toward. We would both then head in that direction placing the wire over tree limbs where possible or over branches. At the landmark we would take another heading and move on. The Beverage Hub is about 60-feet in elevation lower than the shack. As we walked out the Beverage line, the elevation was constantly moving down. In fact, after crossing over a small ravine, we reached a small "cliff" where I walked about 50 yards horizontally to get over the "cliff" but Tim went right down the slope. 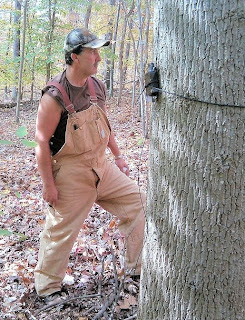 reached a 4-wheeler trail which I knew from the prior Beverage installation was about 500 feet from the Hub and we still had nearly half the wire left. My guess is that this road is over 250 feet below the level of my shack. We then crossed a dry creek and started uphill. At one point we reached a tree-fall where several trees were down and it was really slow-going to get through that jumble of tree limbs with the wire. We were now on the up-slope of the next ridge over from my ridge and came close to reaching the very top of it!

It was a beautiful day and very nice there in the woods. I would have stayed there a couple of hours as it was just so peaceful. But, we needed to get back to the house and that meant moving back down the last slope and then UPHILL all the way to the shack. It was quite an exercise for the old broken leg but we got it done in just over 2 hours.

I should have had about 950 feet of wire on the reel so it's definitely one "long" wire! I have only tested the Beverage on some AM stations and have found that on some it makes a HUGE difference. I'm waiting now for VQ9LA to come on the air and see if I can hear him! I'll also be up early tomorrow to listen for the South Pacific. This is going to be FUN!