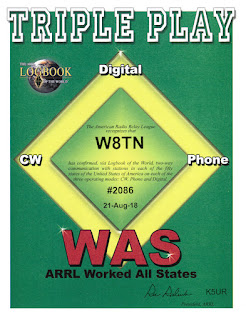 W.A.C. stands for "Worked All Continents."  It is an award sponsored by the International Amateur Radio Union (IARU), and is issued for working and confirming all six continents. These are North America, South America, Oceania, Asia, Europe and Africa.  This award is available for hams in the U.S. through the ARRL:

In an earlier Post to this Blog (https://w8tn.blogspot.com/2018/04/2-m-worked-all-continents-completed.html) I detailed my completion of W.A.C. on 2-M EME.  This award has now been received:

So, with the most gracious help of ARRL Card Checker, Mr. Dave (WA8WV), my QSL's were checked, and the application was  mailed to ARRL.  It only took me 4-1/2 hours from receipt of the QSL from JG1TSG until I had my application prepared, cards checked and the application put into the mail system.  As Tim, K8RRT, says, "How bad do you want it?"

The 6-M W.A.C. Award has now been received as well.  (Click on any photo to see a larger image.)

Now, who would have thought that I would complete W.A.C. on 2-M BEFORE I completed it on 6-M?  Go figure!