My last post was about my grandsons digging the hole for my new tower.  Why do I need a new tower?  Well, I'm building a moonbounce (EME or Earth-Moon-Earth) station for 2-M and need a place to mount the antennas.  This project has been in the planning stages for over 3 years now.  About 14 months ago I started to get serious and placed the order for one antenna.  Delays in shipping that antenna led to me adding a second antenna to the order and the 2 antennas were received from England on July 5th last year.  I chose the InnovAntenna 13el 144MHz LFA yagis as about the longest I could reasonably put up at my QTH.  Each antenna has 16.12 dBi Gain at 144.100 MHz on an 8.003m (3.85 λ or 26.26 foot) boom.  Two of them spaced 4m apart horizontally should give 19.05 dBi (16.9 dBd) total gain. This amount of antenna gain coupled to a 1,000 watt amplifier should give me a modest moonbounce station using WSJT software.  I will, of course, be limited to a single polarity and thus subject to dealing with Faraday Rotation but I should be able to work dozens if not hundreds of stations off the moon.


One major reason for choosing the LFA (Loop Fed Array) antenna is that it has been specifically designed to reduce the amount of noise that is normally received off the back and sides of the antenna.  The tight, highly suppressed pattern and closed loop fed system ensure everything from rain static to man-made noise are heavily reduced.  This is pretty much an essential feature of an antenna that is trying to hear the super-weak signals being reflected back from the moon.  It has a really excellent G/T figure (-1.33dB @ 144.100MHz) showing it is hearing very little from the rear and sides of the antenna.

To the left you can see the current block diagram of my 2-M EME station.  It has evolved as this project has progressed.  The diagram on the left is current as of October 29, 2017.  Click on any photos to see a larger image.

I started out planning for an extremely simple configuration that would just allow me to make the occasional EME QSO.  But, as planning progressed, I kept adding features to make it the most efficient and productive station I could manage.  To that end, I added the EA4TX Antenna Controller that when connected to software on my computer will automatically keep the antennas always pointed at the moon without the need for me to manually adjust the rotors.  I then added the BG7TBL GPS Disciplined Oscillator that will take signals from the GPS satellites and produce a highly accurate 10 MHz reference signal for my Elecraft K3S to ensure it is precisely on frequency.  This is very important with WSJT signals so I felt this would be something that would remove the necessity of my needing to manually insure the frequency accuracy of the radio. 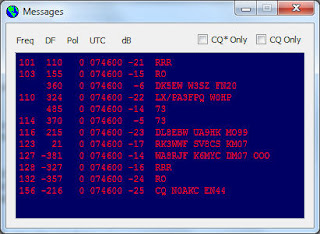 Everything else in the system was chosen to keep the signal losses as low as possible.  Toward that end the preamp will be located as near as possible to the antennas.  The preamp will be directly connected to the T/R relay with a right-angle, double-male N-connector.  All control lines will be shielded.  All computer lines will have ferrites installed on them.  Low loss cables will be used throughout the system including 7/8-inch Heliax for the TX feedline.  The antennas are mounted right outside the shack to keep feedline losses to a minimum.  Using just two antennas is not going to make me a Big Gun.  But, if I can make those two antennas and the rest of the station perform to their maximum ability, I will do well. 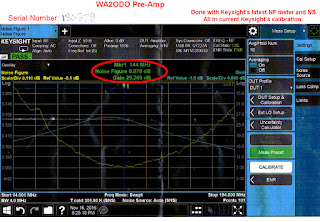 I then decided to add the FUNcube Dongle to the system to allow me to see all the stations which I am able to hear who are bouncing off the moon at any particular time without the need to tune around for them or set schedules to work them!  Unlike HF, you usually can not "hear" the signals from the moon but the computer can.  However, it needs for you to be pretty close to the frequency of the signal in order for the computer to decode it.  The FUNcube Dongle is a SDR (Software Defined Radio) just the size of a USB Thumb Drive.  It can listen to a range of frequencies and decode (using the MAP65 software) all the stations in that range of frequencies at once.  You can think of it as acting like the CW Skimmer of moonbounce.  On the right you can see an image of one of the output screens in MAP65 when I ran it and used a sample file for testing.  You can see that it shows the frequency of each station along with what they were transmitting.  I am so excited to give this a try on real live EME signals!

One other very important part of this 2-M EME station is a good low-noise preamp.  To take full advantage of that item it needs to be mounted as close to the antennas as possible.  I purchased a couple of these preamps from WA2ODO and on the left you can see the Noise Figure Meter printout from the best of these two preamps.  Putting such a low-noise preamp right at the antennas will help to keep the system noise figure as low as possible.

As I continue to progress with this project I will Post articles here on my Blog about various aspects of what I'm doing.  Hopefully, before long I will be able to post the images of my first EME QSO's in a LONG time.  I was on 2-M moonbounce back in the 1980's but only made about a half dozen QSO's with CW.  It was huge fun but I'm expecting this new incarnation to be an order of magnitude better!

Yesterday school was out in Putnam County.  About a week before, my 14 year old grandson, Owen, asked if he and his 12 year old brother, Grant, could spend the night with Evelyn and me on Monday night.  We, of course, said YES.  Then he said, maybe they could dig the hole for my new tower.  DUH!  Free labor?  SURE!

So, the pair showed up Monday after school and we had a lot of fun that evening.  The next day, they were up about 0630 local time, ready to get out there and DIG!  Temperatures were in the high 30's at that time and only made it up to the middle 40's for the day!

I managed to put them off for a bit until I woke up enough by having them eat breakfast and hunt up the tools we would need.  They didn't actually start with the hole project until about 8:50 a.m.  By 11 a.m. they were DONE!  Just over 2 hours and all they had to work with were a couple of shovels and a maul that they used to break some of the rock.  That also included putting together a couple of Rohn 25G tower sections and standing them up to see where the hole needed to be in order to clear the gutter.

On Monday I actually went to Bosley Rentals in Cross Lanes to see about renting a jackhammer because I knew that the land here was mostly rock.  I had no idea those two youngsters would be able to actually dig a 2'x2'x2' hole without the need for a jackhammer or explosives!  I was SURE this would turn out to be a real PITA before the hole could be completed.  As it turned out, there was a fair amount of sandstone and some blue colored rock.  They could sometimes force a shovel under one end of a piece and pry it up.  If not, a couple of swings with the maul would break the rock into smaller pieces.

The first step was to remove the landscaping stone and the landscape fabric that were already in place.  In the photo on the upper left, you can see Grant throwing a shovel-full of the stone over one of my wife's nice bushes.  We did not actually have to remove any bushes but we did do a little judicious trimming on one.  Click on any photo to see a larger image.

On the right you can see that Grant really "got into his work" by going headfirst into the hole to loosen up some of the rock near the bottom.  Neither of these boys are afraid of dirt!  Nor are they afraid of hard work.  They actually look forward to doing things with their hands.  They love to work on engines and constantly are checking the oil in my 4-wheeler and coming up with jobs that we can do around here.  In fact, a couple of months ago over Christmas break, they actually re-grouted my shower!

There was not much space to work so one of them would shovel and the other would carry the dirt away (over the hill) then they would swap jobs.  They took a break or two to go ride my 4-wheeler (they consider that to be BIG fun!) I don't think either of them broke a big sweat.

After they cleaned things up, I took them to lunch at Wendy's (yep, Grandpa is a Big-Spender) and we ate with Tim, K8RRT, and Steve, WW8RT.  After a nourishing 4 for $4 lunch, we drove to Home Depot and loaded ELEVEN 80-pound bags of Quickrete plus three 40 pound bags of gravel into the van.  The ride home with an extra 1,000 pounds in the back of my van was interesting.  If we hit a bump, the rear tires would rub in the wheel wells.  Twice when we had to go up a steeper than normal slope in the road, the trailer hitch drug a bit.  At home, we loaded the Quickrete and gravel onto the 4-wheeler and moved it around to the back porch where it could be covered with a tarp and kept out of the rain ready to be mixed and poured soon.

This even turned into a bit of an archeological "dig" in that they found some metal twist ties, the end that had been cut off a tube of caulking, something that looked to them like Fools Gold, and a crushed Coke can.  No money was found and the "Gold" was not real.

The boys even got a short carpentry lesson in how to cut a 2x4 to fit a 24"x26" hole.  They did not know about the fact that two of the sides of that "box" need to overlap the other two sides to provide a place to nail them together.  Call that a good life lesson learned.  They used a measuring tape, carpenter's square and a handsaw to cut the 2x4 into the sizes we needed to frame the hole.

One thing I will say for sure, and this is NOT just a Proud Grandpa talking, these two boys are WORKERS! And, beside the fact that they do so much work around here, I'm very, very glad and proud to know them!  They are growing into a couple of really exceptional adults.