6-Meters with a Wire Antenna

Well, the June ARRL VHF Contest suddenly appeared on my radar and I "still" did not have a 6-M antenna in the air at the new QTH. And, since my friend Steve, KØCS, was mounting a rover expedition to Capulin Mountain (an extinct volcano) in New Mexico, I thought it would be really cool to be able to work him while he was there. So, on Friday afternoon I gathered some old RG-8X coax that had been in my last "flood" plus a couple of pieces of PVC pipe for a support and I proceeded to erect a 6-M Inverted-V just outside the shack. Below is a photo of the antenna: 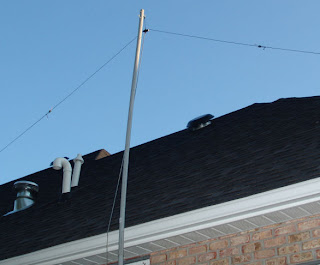 Once I had the antenna up, I got on the air with the Kenwood TS-2000 and made my first 6-M QSO from the new QTH with Tim, KD4LEJ. I figured the new antenna was working quite well and I had probably hooked up with a Florida station. However, when I told KD4LEJ I was in Hurricane, WV, he replied, "I'm in Hurricane, WV!" DUH! Great DX, huh? But, later that night I did work a couple of FL stations so the antenna did seem to radiate.

Then on Saturday afternoon the contest started. My first QSO was W6OAL in Parker, CO. That appeared to be a good omen. As the contest went on, I was working a lot of 5-land stations and sometimes a station in FL. I had to quit after about 3 hours to attend my wife's high school reunion but when I got home, the band was still open. In fact, stations from Texas were STILL being copied my me at 1:50 a.m. when I finally pulled the plug.

Sunday morning yielded a nice opening to New England and I had one 10 minute run where I worked 13 stations. Not quite what I can do on HF but considering just a wire antenna, I was very happy.

Over the course of the contest I managed to work a couple of Canadians, one station in Mexico and a nice QSO with Oscar, CO2OJ, in Cuba Sunday evening. The contest still has almost an hour to run so I might still snag another QSO or another multiplier but right now I have 128 QSO's with 59 Multipliers for a total score of 7,552 Points. Not the best score I've ever turned in but considering I was only using a wire antenna, I'm one VERY happy camper!

So, as it was with the Monster-L, you just never know what you can do until you give it a try.