Recording QSO Audio on the K-3

An optional accessory for the Elecraft K-3 is the KDVR-3 Digital Voice Recorder.  The main purpose of this device is to record your voice and then play it back by pushing a button - a Voice Keyer.  However, it also has a feature where you can push a button (hold AF REC)and record the incoming rig audio.  Hold AF REC again to stop recording.  Push another button (hold AF PLAY) and it will play back that audio.  Hold AF PLAY again to stop the playback.  When in the playback mode, you can rotate the B VFO knob to select where in the 90 seconds you want to listen.  A "*" indicates you are in the most recent recording segment.

The recording can be up to 90 seconds in length and when it completes 90 seconds it just starts recording over what it previously recorded - a 90 second loop of the received audio.  Turn it on when you are about to call that rare DX and then turn it off after your QSO.  You can then easily play it back and see if he really did get your call correct.  You can also export the audio to your computer for archiving purposes (or to email to your buddies to brag about how well you copied the DX!)

Click HERE to listen to the audio.  Then use your BACK button to return to this page.

The trick to getting the audio out of the K-3 and into the computer is that you need to access the CONFIG : LIN OUT menu.  When you first access that menu it will probably read "nor 010" or something like that.  With that menu showing, you need to tap the "1" key.  The menu will now show "=PHONES" and that means the K-3 will feed the same audio that goes to the headphones to the LINE OUT jack on the back of the K-3.  This needs to be connected to your computer's LINE IN jack.  After you have exported the K-3 recorded audio to the computer, access the CONFIG : LIN OUT menu again and tap the "1" key to remove the "=PHONES" feature.  This puts the audio to your computer back to the normal level for PSK or other digital operation.

I use the program Audacity (which is a FREE program you can download from the Internet) to process and save my audio files.  Just "Google" the word "Audacity" for more info.  I run Audacity, start the Playback on the K-3, press the RECORD button in Audacity and then the STOP button when I reach the end of what I want to record.  I can now trim the audio as necessary and perform other operations on the audio file to make it more legible before saving it. 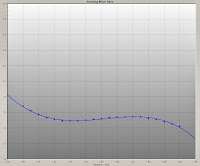 Since pretty much all the WVDXA members who are on 160-M have now worked K9W on Wake Island, I felt the pressure to snag a Top-Band QSO for myself.  After my success with the 40-M antenna yesterday, I felt that today was the day to put up an Inverted-L for 160-M.

Tim, K8RRT, volunteered to come with his bow and arrow and shoot a line over a likely tree.  I got everything ready and when Tim arrived about 3 p.m. we measured out 130-feet of No. 14 solid for the vertical element and a second length for the single elevated radial.

Over the hill, Tim took only 2 shots to place his arrow right where he wanted it.  We pulled back a small line and used that to pull the Dacron support line back over the tree.  The spot where Tim placed the arrow is probably 80-feet above ground.  Once the Dacron line was over the tree, I tied on the end of the vertical element and Tim pulled that over.  At that point, Tim had to leave but all that was left was for me to connect the coax to the remote antenna switch and run out the elevated radial.  It is no lower than 6 feet above ground and probably no higher than 10-feet.  I finished about 5:40 p.m. (just after sunset.) 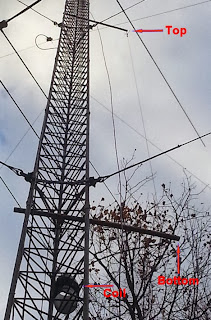 I've been building a 40-M wire vertical here in the house over the last few days and yesterday I installed it.  It is a 33.3-foot section of No. 14 stranded wire that stands off from the tower about 2-feet.  You can see the 2x2 treated boards that hold the top and bottom of the antenna in the photo on the right.  (Click on any photo to see a larger image.)  The bottom of the vertical is about 27-feet above ground and the top is about 60-feet.  I have two elevated radials attached and both slope down a little (they are not horizontal.)  I wanted to get it as high up in the air as possible because below 30-feet on the tower, everything to the West is blocked by my hill.

The photo on the left above shows the RF Choke which is about 21 feet of coax wound on a 6-inch form - about 12 turns.  It is about 3-1/2 feet from the feedpoint of the antenna.  It is marked "Coil" in the photo of the tower. 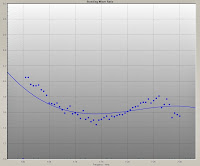 On the left is a plot of the SWR of this antenna.  The antenna is pretty flat from about 7.1 to 7.2 but at a 1.6:1 SWR.  It seems to be resonant about 7.125 MHz.  I was shooting for 7.025 MHz. and missed that by a good margin.  I'm guessing that the proximity of the tower is messing with the antenna both in the resonant point and in the pattern.  Still, it was easy to put this up (relatively easy - I am WAY out of shape!)

But, it was good enough for me to have a QSO with K9W this morning on 40-M SSB.  The operator was Hal, W8HC, who was with me on Swains Island last year.  That was HUGE to be able to work him on Wake Island - AND that was a New One for me on 40-M!.  Obviously the antenna does get out as I only had to call twice to work him (at 43 minutes past my SR.)

Here are some spot checks of the SWR:

At the left you can see a screen shot of CW Skimmer at K8RRT's QTH.  He was decoding the pileup for 5JØR, San Andres & Providencia, who was transmitting on 18.074 MHz.  It turns out that K9W, Wake Island, was also operational at the same time but the K9W station was not on 17-M at this particular time.  K9W's stated transmit frequency on 17-M is 18.079 MHz.  That would be square in the middle of the pileup on 5JØR!  (Click on any picture to see a larger image.)

On the right you can see the list of stations who were calling 5JØR, and who were being decoded by Tim's CW Skimmer program.  Who knows how many others were calling that Tim was not able to copy?  You can not see all the stations that CW Skimmer was decoding (see the extra yellow dots with no lines coming from them at the top of the image on the right) because Tim's monitor is not tall enough!

One interesting note is that while I was writing this Post, I was listening to 5JØR on 17-M.  By my count, he made 20 QSO's between the times when he sent his own call.  I looked at the clock when he made that second transmission of his callsign and then noted the time when he ID'd the next time.  12 minutes passed between those ID's!  Considering the potential for confusion on which station you worked when there are multiple DX'peditions on the air at the same time (and similar transmit frequencies), it would be better if ALL DX'peditions gave their calls more often.