At the 2008 Dayton Hamvention, Bob, W8QHG, had me pick up two crystal filters and a roofing filter for his Yaesu FT-1000MP MkV. It was cheaper to have them shipped than to pay Ohio Sales Tax so that's what I did (but I still got the 10% Dayton discount!) Once the filters arrived I needed to go down to Bob's and install them. I had already done this on my FT-1000MP so I was somewhat experienced. Below is a shot of me doing the install snapped by Bob. I tell you, that Optivisor is the berries when it comes to seeing small items! 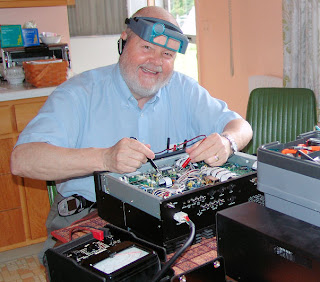 Things went really well until we hooked the radio back into the station and heard ABSOLUTELY NOTHING! RATS! What had I screwed up? The radio seemed to work in all regards but as Bob commented, "It sounds like there is no antenna connected." Well, we tripled checked that the antenna wire was plugged into the correct jack and that antenna jack was selected in the radio and the antenna switch was turned on and in the proper position - but still - NOTHING! So, a break for lunch was in order.

After being refreshed at Bob Evans we returned to Bob's QTH, removed the radio from the station, removed the 15 case screws and pulled the case apart to check and see what might have been messed up. Just as I got the case apart I heard Bob exclaim "OH, NO!" That was when he realized we had failed to connect the antenna wire from the station to the outside antenna cable where he removes it for lightning protection. DUH! You would think two guys with all our combined experience would have thought of that already. NOT!

So, another "lesson learned." Don't overlook the obvious. Bob hit the nail on the head when he said it sounded like there was no antenna connected - because there WASN'T! Once we checked out everything, re-assembled the radio and re-installed it in his station, it performed flawlessly! The filters helped out quite a bit and Bob was pleased with his purchase.

Now, I seem to have heard that KC8UHE bought a roofing filter for his FT-1000MP MkV at Dayton and I think W8UV has one on his shelf as well. Maybe I should just set up a small assembly line and get all those rigs done at once, hummm . . .