I am sad to report that my lifelong friend, Steve Gecewicz, KØCS, passed away on February 9, 2021, at the age of 73.  I have known Steve since the third grade when he moved from Spokane, Washington, to Ravenswood, WV.  We have been close friends all that time.  In fact, we went on three DX'peditions (just the two of us) to Grand Cayman, Bermuda and Macau.

Steve achieved (among many others) the following awards: Top of the Honor Roll - 5BDXCC - 5BWAZ (all 200 Zones) - 6 Meter WAC - A1 Operators Club.  The last Kansas City DX Club Newsletter I have is from August 2019 and KØCS still tops the KCDXC's Honor Roll:

The September 2017 issue showed Steve was even on top of world-renowned DX'er, Fred Lindsey, NØXA, (SK) who had surpassed the 3,000 Challenge level:

Steve had been a ham for almost 57 years having been first licensed in 1964 as WN8OEU, he then upgraded to Advanced Class in 1970 as WB8IAY and later WBØRET and finally to Extra Class in 1977 as KØCS.

See the link below for an interesting review of the KC-1:

It was reviewed in the October 1985 issue of CQ Magazine on page 40:

Steve continued to perform warranty service on all of his products regardless of how long they had been owned.  He would also pay for shipping to return them.  Once I remember he repaired a Kansas City Keyer for a ham in Russia some 12 years after it was purchased.  In addition to replacing the broken parts, it cost Steve nearly $100 to ship it back!  He wanted to be known as having the VERY BEST Warranty service of any company in the world.

While living in Dayton, Ohio, Steve served on the "Hamvention" Committee.  He was also the President of the Kansas City DX Club in 1980, a member of the ARRL Contest Advisory Committee in 1985 and the Publisher of the Low Band Monitor Newsletter for 17 years, from 1993-2010.  He wrote, typeset, and published that newsletter himself and distributed it all over the world.

Below is a scan of part of the cover of just one random issue.  I scanned this one because it lists the awards Steve had created and sponsored for low-band operators.

The Graphical 160 Meter WAC mentioned in the above scan was an AWESOME award!  For many years Steve was upset by the fact that stations on the East Coast of the USA had an advantage because of their locations in contests and awards.  It was MUCH more difficult for stations in the Mid-West or the West Coast to work Europe on the low-bands.  In an effort to level this playing field, Steve created the 40-K Graphical WAC (Worked All Continents) award for 160-M.  It required people to work each of 6 continents and then calculate the distance between their own station and the DX they worked.  The sum of those distances needed to reach or exceed 40,000 miles.

Using only an Inverted-L with a single elevated radial and some Beverages (including one Lance Johnson Engineering model), I was extremely pleased to complete this challenge on THREE different years.  Below is my 2007/2008 entry:

For those who submitted their score as above, and managed to reach the 40,000 mile level, Steve had a medallion engraved for each person - at his own expense!  There was no charge for the award!  I was (and am) extremely proud of my accomplishment in this award chase and have my three medallions displayed on the wall of my shack this way:

When he passed Steve had credit for working 339 of the 340 current DXCC entities so that leaves him one away from Top of the Honor Roll "at this time."  He never worked the Republic of Kosovo, Z6, because it became an entity in January 2018 after he ceased operations due to health reasons.  However, prior to that date, he DID achieve the coveted "Top of the Honor Roll."  Below is his final Awards Status on LoTW. Pay attention to his low-band totals and his 85 countries confirmed on 6-M - FROM COLORADO !!  This was way before the creation of the digital modes and the explosion of 6-M activity.

Steve had his first stroke on May 11, 2010.  Below is an issue of the KCDXC Newsletter from October 2011 where Steve wrote a lengthy article "The Asterisk Year" which contains some interesting insights into his life.


Steve had a BSIE from West Virginia University and an MBA from the University of Dayton.  He worked at Top Drawer companies like General Motors, KitchenAid and Hobart during his career.

After retiring from his "day job" he began a Desktop Publishing operation.  One of his projects was to produce service manuals for many KitchenAid and Viking home appliances.  Those companies would send him a couple of the appliances and he would disassemble them, photograph the parts, and create the service manuals.  After they were approved, he would arrange for the printing.  Early in this process he "blew away" the corporate types by uploading to a secure website the drafts of the manuals.  Each group manager had access to look over the draft and make additions or corrections.  Steve would incorporate those changes and upload the new versions, usually within hours!  Steve's method insured that ALL departments could look at the same document simultaneously instead of the way the process used to run where one department signed off on it and sent the paper copy to the next department who did their work, then they sent it to the next, and so on.  It could take a month to get a single draft approved by everyone.  Steve's innovation resulted in the manuals being approved in a few days.  The corporate "bosses" had never heard of such an idea but were extremely happy with his work.

It's really difficult to distill a 65-year friendship into just a few paragraphs.  I'm sure I will think of many of Steve's other accomplishments over the next days and weeks as I celebrate his spirit and his life.  I hope you will do the same.

To permanently Honor the memory of KØCS, a "brick" has been placed at the American Radio Relay League's "Diamond Terrace" in Newington, Connecticut.  This terrace is prominently located at the entrance to the ARRL Headquarters. 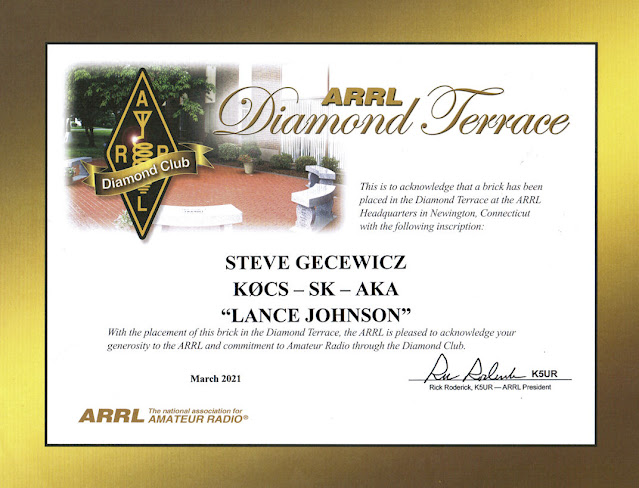 Steve definitely left his mark on the amateur radio hobby as well on the lives of all who knew him.  RIP my friend, you've earned the rest!

Clark, This is Michael KF5LJN, Steve's cousin. Rob May W5WS (formerly NV5E), Googled this memorial to Steve when I told him that Steve had died. Bobbie, my mother, and I just read the memorial. This is a great tribute to Steve. Steve was a true friend. You and Wayne Ordakowski N0UN in Colorado helped Steve very much. Thank you.

An excellent tribute to my friend, neighbor and great guy Steve K0CS. We miss him. Thank you Clark!

I will miss Steve. I was a longtime subscriber to his Low Band Monitor and have saved all the issues for reference. RIP.