I have not reported on "Phase I" of my antenna project before but suffice it to say that Tim, KC8UHE, came and cleared a lot of brush around the base of the tower and around the SteppIR antenna. He also sprayed a few gallons of Roundup to kill off the brush so there will be space to work when erecting the antenna. Also, Pete, K4OM, came one day and we attempted to install an "N" connector on the hardline for the 6-M beam - but we failed. Apparently there is some coating on the center conductor that prevented it from making sufficient contact with the center pin. Now that we know about that problem, we are ready to do it again.

Today, 4 willing souls arrived beginning at 9 a.m. to work on Phase II of the project. This involved digging a trench to bury three 2-inch PVC pipes (which will eventually carry the coaxes and control lines) and install a No. 4 solid copper ground wire and 2 ground rods. Below you see Pete, K4OM, Steve, KC8FVE, and Tim, KC8UHE hard at work on the trench (click on any photo to enlarge it): 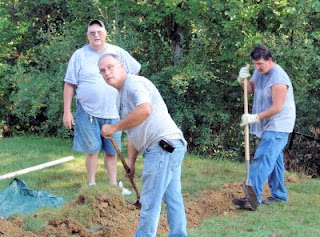 As the work progressed, we moved Pete, K4OM, into more of a management position. Here you see him directing the work from the shade of the steps to the ham shack: 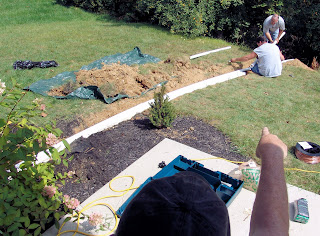 Below you see my step-son, Darren, KC8QGV, coming up the hill from doing some chain saw work to cut a clear path to the tower. Also, Pete, K4OM, is installing the ground rod just outside the shack. Because of the rocky soil, we had to angle this rod a bit but were able to sink about 7 feet of in in the ground. In the third photo below, you can see Steve, KC8FVE, just about to reach the point where we stopped pounding in the ground rod. 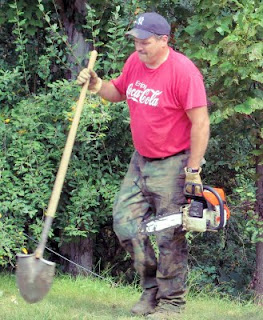 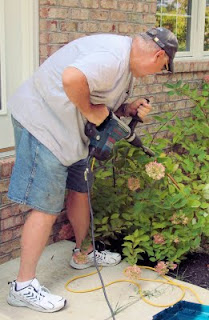 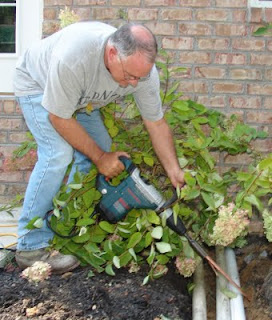 A 200-foot roll of No. 4 solid copper was purchased (ouch!) and it was run under the house and up into the ham shack. It exits the house where the PVC pipes do and will later be bonded to the ground rods just outside the shack and where the ground begins sloping down to the tower. I will also put ground rods about every 16-feet down to the tower and this No. 4 will be bonded to all of them and to the three rods that will surround the tower.

All that remains of this portion of the project is to acquire about 200-feet of 2-inch PVC and run it to the base of the tower, install a junction box at the top of the hill and another at the tower and then begin running the feedlines up to the shack. This is a HUGE step forward in getting to the point where we can put the antenna up and hook it all together. My hat is off to all the guys who have helped up to this point! I sincerely appreciate all the excellent help and am now getting really anxious to see the antenna finally at the top of the tower.

P.S. I also need to thank my wife, Evelyn, for providing a great lunch for everyone. The guys partook of hotdogs with homemade chili and slaw, homemade Bar-B-Que, chips and dip, veggies and dip, and they even tried some Humus. I did a little fetching and carrying in my wheel chair and after Tim, Steve, and Pete tried to open the PVC glue, they had to turn to the old guy in the wheel chair to open the can with his bare hands! What can I say?