Snacking on my Beverage Feedline

About 3 or 4 weeks ago I became aware that my Beverages were not working as well as they should.  They seemed to work a little bit, but not anyway as good as they had in the past.  I checked all the equipment and connections in the shack and found nothing wrong.  When I was not able to copy the TN2T station that several of my local friends worked on 160-M, I knew it was time for a "Trip Over the Hill." 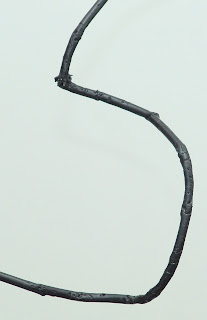 Today the sun was out (it wasn't raining) and even though the wind was pretty fierce, I decided to take a trip out to my Beverage Farm and see if I could spot any trouble.  Since it seemed that ALL the Beverages were affected, I decided to start by looking at the common feedline that went to the Beverage Antenna Switch.  I had no more than started over the hill than I saw, 200-feet away, something out of place.  There is a "road" behind my tower that was used to bring heavy equipment in to develop my lot.  It ends at my neighbor's lot so there is not any traffic on it except for the occasional 4-wheeler who is exploring.  I had run the Beverage feedline and the control wire for the Antenna Switch through a piece of Yellow PVC where it crossed this road just to protect the wires.  That PVC had been under the leaves and stuff and was nearly impossible to see the last time I was down there.  Now, it was right out in the open.

When I got to the Yellow PVC, it was immediately apparent that "something" had been attempting to snack on the feedline.  As you can see in the photo at the right, it was well chewed.  So well that it was open to the center conductor in a couple of places and bent entirely back on itself at one of those.  The photo shows about 2-feet of the feedline - out of 5 or 6 feet that were chewed.  I cut out the damaged section and replaced it with new cable.  This took a trip back up to the shack to get the reel of new feeline, the RG-6 connectors and the necessary tools.  I had to install 4 F-connectors and two double females to put the new piece inline and then securely tape those connections.  I did run it back through the PVC for the same reason as before.

I just checked the Beverage to the NE and as I write this, I am copying LX7I in the CQ 160-M Contest, Q5 on the Beverage.  I can not hear him at all on the transmit antenna.  I guess I've solved this problem - at least until my little friend comes back for another "snack."

You can click on the photo to see it larger, then just close the pop-up window with the "X" in the upper right-hand corner, or use your BACK button to return to this page.