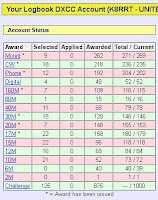 K8RRT checked his LoTW account today and there it was, the 1,000th confirmation in his DXCC Award Account.  Tim now qualifies for the ARRL Challenge Award and can get that fancy plaque for his wall.

Nice going, Tim.  Now you can start working on the next 500 so you can get your first Medallion for your shiny new plaque.

For the last week, my grandsons, Owen and Grant, have been studying the Morse Code.  I thought it would be good to let them join in on the ARRL Kid's Day activities to go along with their studies so they could get a feel of what Ham Radio is all about.


Since my station is not fully operational, Tim, K8RRT, lent me his station for the day.  The boys and I arrived about 1:45 p.m. and began booting up the equipment and computers.  Tim has a very extensive computer interface to his station and the boys were interested in all aspects of that.  (Click on any photo to make it larger.)

Once the station was operational, we went over how they would talk on the radio.  Tim uses a footswitch to key the transmitter so they had to learn to step on that switch when they wanted to talk.  We also went over the basics of what they needed to say in the QSO's and I created a short "cheat sheet" for them to follow.  You can see the "Cheat Sheets" lying on the keyboard.  They only looked at that sheet for the first few QSO's because they had memorized everything they needed to say.

We set up the amp and ran about 1,200 watts so the boys would be heard well even if they didn't talk very loud.  After a few QSO's they asked if they could not wear the headset because we were listening to the speakers.  When doing that, they sometimes talked into the back of the microphone and did not produce a very strong signal.  I showed them the Power Out meter on the amp and explained how it had to move strongly up scale for them to be heard and that did it - they spoke louder and more into the mic after that!

Since the same day was also the West Virginia QSO Party, we had a couple of stations ask the boys what County they were in so they could count the QSO in the WVQP.  Owen then decided to simply say, "I'm located in Hurricane, West Virginia, and that's in Putnam County" with each of his QSO's!

During the video below, you can hear that Owen actually had a pileup coming back to him plus a WA6 station even called in during his QSO.  The recorded audio is a bit low so you might need to "Crank It Up" to hear everything.


Near the end of our operating time we even managed a QSO with the Dorothy Grant Elementary School in Fontana, CA.  That school has their own Ham Radio Club and uses the callsign, K6DGE.  HERE is their web site.  Back in April I was privileged to attend one of their Field Day events where the kids learned electronics, built an antenna and operated the radio.

We had to leave the air by 4 p.m. because the boys had other engagements.  They had paid close attention to our startup of all Tim's equipment and they helped me shut everything down.  In fact, Grant spotted that I had left the rotor turned on and brought that to my attention before we left.

Later, at the Dairy Queen, where we were enjoying a celebratory Blizzard after our Kid's Day operation, Grant looked up at me and said, "Grandpa, I had a really good time!"  Yep, that's what it's all about, folks!  Ham Radio is about having a Good Time!