W8TN is BACK on Top Band! 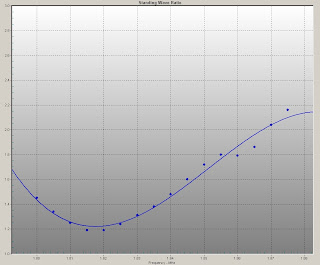 Today, Mike Null, NU8LL, and Eric Mynes, K8OHZ, came to the Hill and pulled up the 160-M Inverted-L. That antenna had not been replaced on the tower when we did the antenna installation of the SteppIR. But today, Mike climbed the tower with Eric as Ground Crew and re-installed the Inverted-L. Mike also removed the gin pole and rope and brought them back up the hill with the roll of Phillystran.

I guess tomorrow I'll have an early wake-up to try for TX3A on Top Band. I was up at 3:00 a.m. this morning for 2-1/2 hours trying to work them on 30-M when they were S-9 here but nothing! So, hopefully tomorrow morning will bring good luck for me. But, just to see if the antenna was functioning, I took a look at the band and found OE3I operating in the Austrian 160-M Contest. I do NOT have Austria confirmed after sending a Direct QSL 2 years ago. So, I called and worked OE3I with very little trouble. And here's the good news, HE's ON LoTW! YIPPEE! I'm BACK! 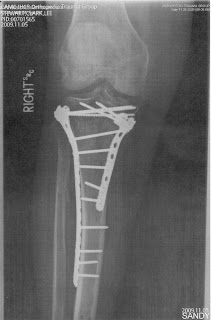 Today I visited the Orthopedic Surgeon who had repaired my broken leg. He took another X-Ray (see the photo at right - click on it for a larger image), looked over the leg, felt it, moved it, and said I was now cleared to do whatever I want! YIPPEE! It's been 4 months and 2 days since I broke the leg.

Actually he did schedule me for 6 more weeks of Physical Therapy (3 times a week) which will be pretty intensive. Strength Training, Gait Training, more Flexing, etc. I'm sure the people in P.T. will turn the screws tightly now as before I was limited to NO weight bearing on the broken leg.

WOW, I can't tell you how good it feels to not be just marking time (or so I thought) waiting for everything to heal. The surgeon was very pleased with how the incisions had healed and he liked the look of the X-Ray. He said he had been pretty worried about an infection and with my diabetes how well the healing would go. However, Evelyn has kept me on the straight and narrow with my diet and for the month of October my fasting blood sugar readings averaged 116 with a high of 139 and a low of 92. This is great as I'm still healing somewhat so the readings may even go lower once I'm past that stage and start getting more exercise.

Actually, as soon as we got home I put on my shoes and have been walking all over the house using the walker but now I'm not "hopping." I'm bearing weight on the broken leg and actually WALKING! WOW! (It didn't take too many walks to get tired though - I really need to build up my strength!)

You never really appreciate the simple things in life until they are taken away. I have so much empathy for those people who are stuck in a wheelchair without the possibility of ever getting out of it. It's definitely a hard road.

Looks like if I ever fly somewhere, I'll set off the metal detectors for miles around!

The last work on the W8TN antenna project was just over 3 weeks ago. A HUGE amount of work was done but we came up a bit short on time to finish the project. Since then the coax feedlines and the control cables have been entering the ham shack through the window. See the photo below for how it looked (click on any photo to view it larger.) This worked OK for awhile but with the nights getting colder, it was starting to become a problem. Also, the need to lift up the coax to allow the wheelchair to roll underneath it led to me not keeping the antenna connected all the time.

So today, Tim, KC8UHE, Mike, KE8V, and Apollo (the Archer), N8RR, came to remedy that problem. In addition to running the cables underneath the house, they were kind enough to erect a KILLER 80-M Vertical down over the hill. The "Archer" brought his trusty bow and amazed Tim with his ability to loft an arrow with great finesse over the exact limb of the tree which was chosen to support the vertical wire. Below (L-R) you see KE8V, The "Archer", and KC8UHE. 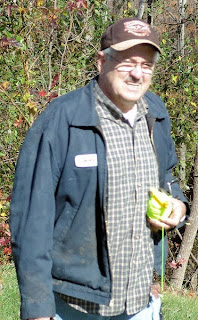 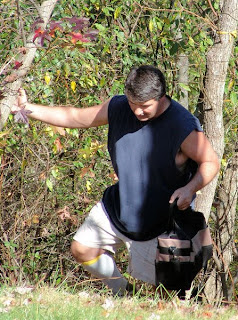 I look at these "projects" as my way of helping the hams become "Heart Healthy." The climb up the hill is a great workout! 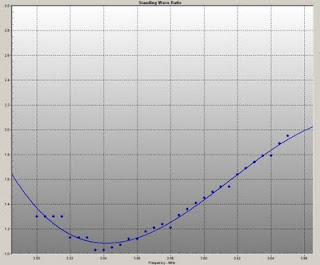 I cut the vertical portion of the wire for the vertical as well as the two radials to Apollo's specifications of 66-feet. I then crimped and soldered ring lugs onto the wire to make connection to the center insulator easy. Apollo shot his arrow over the chosen branch and pulled up the wire. He says about 5 inches of the vertical and radial wires were used to attach to the insulators. The MFJ-259B meter was put on the antenna and it was deemed DONE. To the right you see the SWR plot of the finished antenna done from the shack with my N8LP LP-100 Digital Vector Wattmeter. The best SWR is 1.03:1 at 3.535 MHz. It is 1.35:1 at 3.500 MHz. and doesn't pass 2.0:1 until you reach 3.656 MHz. I'd say that's going to be one heck of an antenna.

Again I want to express my sincere appreciation to the members of the WVDXA who have taken so much of their time to help get my station operational again. Once the 160-M antenna is pulled back up the tower, I'll be SET. Look out DX, here I come!