Antennas Work Best if You Bleed on Them

Yesterday I was feeling a little "under the weather." I had a sinus headache for most of the day but it did not stop me from working CT3/OM3GI in Madeira Islands for Country No. 99 on 160-M. However, I did go to bed a bit early to try and shake the headache and general bad feeling.

About 11:00 a.m. today, Tim, KC8UHE, called and said he was not working and was coming over to help me find why the Famous W8TN 160-M Inverted-L antenna was not performing as well as it had at first. Tim knew the CQ 160-M CW Contest started tonight and he wanted to help me get up to speed with the antenna. I tried to beg off, telling him I'd just work on it later, but he would have nothing of that. When I told him it was just too cold to work on the antenna he said the cold didn't bother him and I could just stay inside and he would go over the hill and see what had happened to the antenna. Since I was not able to dissuade him from coming over, I agreed and struggled out of bed to take some more Tylenol.

By the time he showed up I had most of my gear together. Tim brought his spin-casting rod and some new 20 pound test line. He strung the new line on the Zebco reel and we were ready to go. Down over the hill we slid (lots of snow still there) but no one fell. At the antenna I could see that the top-hat portion of the antenna had pulled back out of the trees and the antenna was "drooping" in the vertical section as well. I had known something was wrong since the SWR had creeped up to where it was 1.43 : 1 at resonance and that resonant point had crept up to 1.850 MHz. At 1.830 and below it was well over 2 : 1 which is bad for working DX!

The tree I needed to put the line over was about 90 feet tall and we did not think we could cast the line from the ground. So, up the tower I went (boy that steel was cold!) At about the 65-foot level I belted on and got ready to cast. However, the line was fouled in the reel! So, for about 40 minutes I hung off the side of the tower, disassembled the Zebco spinning reel, and removed the tangled line. I had to cut off the tangled part then re-string the pole and re-tie the lead weight.

Finally, I was ready to make the cast. The line sang out and the yellow lead weight sailed right over the spot I wanted. Then, it suddenly stopped! I had run out of line! Rats! So, I thought I would just cut off the line and tie it to the end of the support line for the top-hat portion of the antenna and hope the weight would pull the line down to the ground (about 85 feet worth!) But, I could not pull the top of the antenna out of the trees. It had gotten fouled in there and no matter how hard I pulled, the tree just bent and the line stayed tight.

Now I had to think quick and formulate a Plan B. I decided that since the line was tight in the tree, I would just climb further up the tower and tie off the vertical portion of the Inverted-L a little higher up. That's what I did and it worked! The vertical portion was now about 15 feet higher and there was a little more of an angle for the top-hat but the antenna was firm. When we finally made it back to the house (only 1 fall - me!), the SWR was now 1.25 : 1 at resonance and the resonant point was at 1.838 MHz. much nicer! The Alpha was very happy and would put out 1,500 watts with only about 20 watts reflected.

I'm sure most seasoned DX'ers are familiar with the old saw that an antenna does not work well unless you leave some blood or skin on them. Well, that's what I did. In cutting the excess line I managed to cut myself twice! Once on my thumb and once on my ring finger. 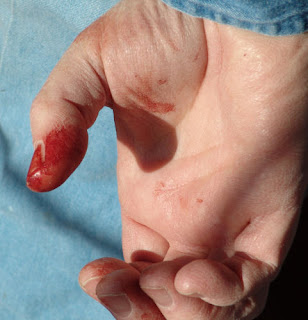 I can now attest that the old saw about bleeding on your antenna is TRUE! With the new antenna I managed to work SIX New Ones on 160-M in just my first 1-1/2 hours of the contest. Yee, Haw! And, those were worked with an A-Index of 11 and a K-Index of 2 which is not all that great.

I worked EI-Ireland, V3-Belize, YU-Serbia, UA2-Kalingrad, VP9-Bermuda and CT-Portugal. This brings me to 105 Countries Worked on Top Band. That's about 83 New Ones in the last 9 weeks since I put up the Famous W8TN 160-M Inverted-L. I think I'll hit the sack now and see if I can snag a ZL or a VK6 early Saturday morning.