Today we had un-seasonably fine weather so I felt I had to take advantage of it and run out the wire for the second Reversible Beverage. I had purchased 1,000 feet of the WD-1A two-conductor wire and planned to pretty much duplicate the very successful first installation of a 60°/240° Beverage pair. Since my grandsons were out of school, I enlisted their help. After a trip to Subway for lunch, we trekked over the hill and attached the wire to the Beverage 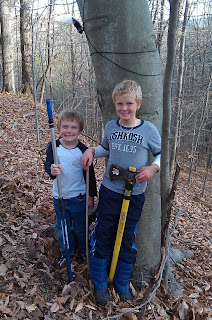 "Hub" tree. We then started off on a heading of 160° (the Reverse direction will be 340°) and began stringing out the Beverage wire. Using the same "extension" handle for a paint roller that was used before, we lifted the wire over any available branches to keep it high enough that the deer could pass under it.

The boys were a great help. One carried the ground rod and the ax (used to drive in the ground rod) and the other the spool of wire letting it run over his shoulder as he walked so I could place it above the branches. After awhile the boys would swap jobs and we would have a "water break." We had taken both my cell phone and a FRS radio that allowed them to keep in communication with "Nana" back at the house.

As we were nearing the end of the spool, Owen, who was on point at the time, said "Grandpa, there's a cliff here!" Well, that decided where we ended the Beverage. I'm guessing we were 850 to 900 feet from the Beverage Hub. The ground slopped very steeply down at that point and we chose to install the transformer and ground rod at the brink of the "cliff." In the photo you can see Grant (6 years old) on the Left and Owen (8 years old) on the right and the transformer in a plastic Zip-Loc bag hanging from the tree.

As we started back we ran into one of our neighbors and his 6-year old daughter out walking their dog in the woods and we decided to walk back to their house and then up the street to where we started. In doing that I did not have time to hook up the transformer at the feed end so I'll not be able to test the Beverage yet.

The boys were a great help to me and a good "safety" feature. Grandpa tripped over a branch at one point and sprawled on the ground (no injuries) but it was good to know that they were there in case I really did run into a problem.

Great story Mr. Prez. A great day with the grandsons. I need to move to a place on top of the hill and have some room to play with long beverage or some kind of ant for 160
Great pic also
Papa November