This past week was Day Camp for Cub Scouts in the Pioneer District of the Buckskin Council and it was held at the City Park in Hurricane, WV.  My two grandsons were both attending so "Grandpa" was asked to participate.  They needed someone to teach Electronics and to help them build a Wind Direction Indicator and as Grandpa knows a little about electronics, I was asked to volunteer.

Sounds simple enough - right?  Well, this "project" came about at the last minute.  On Thursday I took an online course to become certified as having been trained in "Youth Protection."  Then it was just Saturday when I received the materials so Sunday was spent in working out the experiments for the "Electronics" class.  Things didn't seem too difficult at this point but that was about to change.

On the first day of camp, one leader had to return home so I was drafted as an assistant to spend 8 hours herding 14 nine and ten year-old's around the camp.  Oh, and the temperature was to hit 90-degrees with equal humidity!  But I managed to successfully steer the group through 8 activity stations from Flag Raising to Flag Lowering with no problems.  I can't tell you how many times I counted 14 "heads." 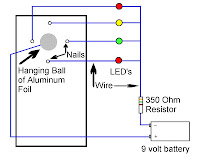 Tuesday and Wednesday were a blur.  Once I got a look at the "materials," I knew there was just no way I could direct 7 to 10 year-old's to wire the circuit on the right in 40 minutes.  Heck, I couldn't get most hams to do that.  So, it became apparent that I needed to "prepare" the materials.  That meant wiring the LEDs so that all the Cub Scouts needed to do was to connect 5 wires and pound in 4 nails.  I even figured that if they put the wire in a pilot hole, they could make the wiring connection by pounding in the nail.  To the right is a schematic I drew of the circuit.  Click on any photo to see it larger.  Close the pop-up picture window or use your BACK button to return to this page.

For each unit, once I got the 6 separate wires cut to length and stripped to the right dimensions, the paper LED mounting strip cut, and 6 pilot holes drilled in the wood strip, it turned out that I could wire 8 of them per hour working at top speed.  This meant that I had three nights in a row of no more than 4-1/2 hours of sleep!

With help from my wife, Evelyn, and the mother and father of my grandsons, David and Marcie, I was finally able to complete the wiring of the 100th LED module at 11:57 p.m. on Thursday night.   The above photo shows all 100 ready to take to camp.  I was a little depressed because the camp had 135 Scouts signed up for camp.  I really had no idea how I was going to manage not being able to let every boy build his own Wind Direction Indicator since I only had 100 units completed.

The Electronics class consisted of making a battery out of two potatoes to power a digital clock, making batteries out of vinegar, Gatorade and even water.  The finale was to make batteries out of lemons using a galvanized nail and a penny as the electrodes.  The Scouts helped me make up 8 lemon batteries which we connected in two banks of 4 series-connected cells.  The two banks were connected in parallel and that gave enough current to power an LED.  I had made a "shadow box" out of a large cardboard box and put 8 LEDs in the back of the box.  Since Day Camp had a Star Wars theme, I put a picture of the Millenium Falcon in the back of the box with the LEDs leading out of the center of that picture.  I had a board with 8 nails connected to each LED and as I ran the hot lead down the strip of nails, the LEDs would light in order and it looked like the ship was firing a laser cannon!  The Scouts loved it! 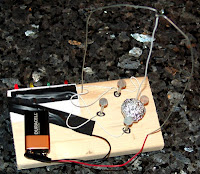 On Friday I began instructing the Scouts on building the Wind Direction Indicator.  You can see the final unit on the left.

The Scouts put the 4 white wires into 4 pilot holes that had been pre-drilled by David and marked with circles by my two grandsons.  They then pounded in four 2-inch galvanized nails just enough to keep them steady.

They then formed a ball of aluminum foil around the end of the 7-inch wire and suspended it from a bent piece of bare Floral wire.  Marcie had bent a "dimple" into the center of each wire to serve as the support for the hanging ball.  The Floral wire was then bent and twisted until the ball hung in the center of the nails.  With the positive battery wire connected to the Floral wire (by pressure in the pre-drilled hole), current passed through the Floral wire to the hanging aluminum ball and when the ball touched a nail, the circuit was complete and an LED would light. 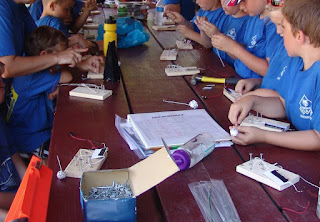 The first group consisted of 2 dens with a total of 23 Scouts.  We ran over time by 5 minutes but the end result was that ALL 23 completed their Wind Direction Indicator and they ALL functioned perfectly!  All those late hours seemed to be paying off.  You can see the Scouts working on the indicators in the above photo.

I taught 6 classes with no breaks.  It was a total blur.  However, when the last group came, I asked for the number of boys.  I was told it was 16.  I looked in my box of materials and found that I had 15 units left.  But, I also had my "demo" unit.  So I pulled the wires out of the demo unit and passed out 16 units.  EVERY single Scout who came to my class got to build and take home a Wind Direction Indicator.  WHEW!  What a stroke of luck!

The pay-off came with the cries of "AWESOME" and "WOW" that issued from these youngsters.  Also, on Friday, one youngster was talking about Protons and Neutrons (something I had mentioned on Thursday in the battery class.)  His mother said he had been talking about those things last night and she felt she was going to have to take a Physics course to keep up with him.  And, at the final session, an 8 year-old walked up to me and announced, "I've been waiting for this ALL DAY!"  His mom said as they left that he had been talking about coming to my session on the Wind Direction Indicator all day - he couldn't wait to come.  She speculated that his dad, a den leader, must have told him about it.

Does it get any better than that?