Today was an overcast, rainy and foggy day.  Rather unusual for August. So, it was a great day to stay inside and build a radio (or TWO!)  Our two grandsons, Owen (13) and Grant (11) have been helping us with landscaping this week.  On Monday we picked up a 6x8 foot trailer full of two scoops of black mulch.  The boys shoveled that to a yard cart they had attached to my 4-wheeler and they drove it from the street to the top of the yard and spread it out.  Tuesday, we did the same thing all over again!  On Wednesday we used the trailer to get 720 pounds of rocks to edge the landscaping and the 4-wheeler/yard cart was used again.  The boys really did a LOT of heavy work on those days so they deserved a day off.

About 3 years ago I purchased a crystal radio kit at the Dayton Hamvention and the boys built it.  They then installed a longwire antenna at their house and listened to it a good deal.  Not being very sensitive, it only picked up a few stations but they had fun with the building.  At the 2013 Dayton Hamvention, I picked up a more advanced AM radio kit and in January 2014, Owen and Grant built that one as you can see in the photo above on the right.  They did all the work, including the soldering, and had a really good time. This radio was much better than the crystal radio and pulled in more stations. 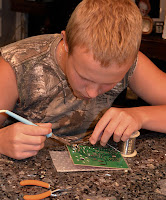 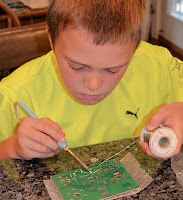 As I was getting ready to go to this year's Hamvention, the boys asked if I was going to buy them another radio kit!  WOW!  That was a very pleasant surprise but, I didn't find anything at Dayton that would be good for them.  So, I turned to Amazon and found an Elenco FM Radio Kit for $15.19 with FREE shipping.  Of course I bought TWO of them so each boy would have his own.  NOTE:  The manufacturer's suggested age is 17 and up!  However, I just KNEW that would NOT apply to these guys - and I was right.

On the Left above you can see Grant soldering his kit today.  On the Right is Owen soldering on his.  I only have one soldering station so we worked out a "share" plan where one boy would install parts while the other was soldering.  Then they switched.  It worked great!  You can click on any photo to see a larger image.

On the left below is an image of how the small parts were packaged in the kit.  That photo also shows one page of the instructions.  Very reminiscent of Heathkit with plenty of detail and images for them to see what the instructions were talking about. 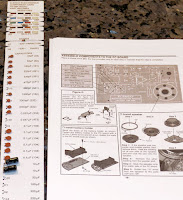 The kit has a screened circuit board with schematic symbols marking the placement of each part.  The radio has two IC's and one is pre-soldered to the circuit board.  The other is socketed.  We learned that capacitance is measured in farads and resistance in ohms, that resistors have a color code to identify them, we learned the schematic symbols for all the parts, and so many other great things during the build.  The kit is built in two sections and after the first section there is a TESTING phase where you can see how you are progressing.  Both radios passed all tests at this point.

We took a snack break, and a lunch break as these guys burn a huge amount of calories even building a radio!  Then we had to go walk the dog for their Uncle and that took an hour or so.  Finally, we reached the last step and ran into a snag.  Grant attached the telescoping antenna to his radio with no problems but it turned out that Owen's kit only had the holes drilled in his antenna and they were not tapped for the screws. These were VERY tiny screws and I knew no one would have a tap and die set for them so on the way back from the dog walk we stopped at the Hobby Shop and got a couple of 2mm bolts and nuts.  Back at home we had to drill out the holes a tiny bit so the bolts would fit but soon Owen's antenna was installed.  All in all, we actually only spent about 4 hours building the radios. 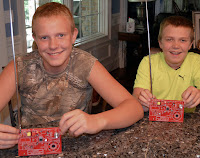 SUCCESS!  Both radios worked right off the bat!  Smiles all around!  High fives with Grandpa!

The radios have an auto scan feature and Grant read the instructions and figured out how to tune the radios for the first time.  OUTSTANDING!  Both radios were able to bring in many stations with enough audio that Evelyn and I had to ask them to turn them down a touch.  As we were taking them to meet their mom, one of them was running the radio in the back of the van.  What fun!

I guess I need to lay in a supply of 9-volt batteries as I can see these radios are going to get a lot of use!  I know that both Owen and Grant had a great time building these radios and I know they built a lot of great memories for the rest of their lives.  And, Grandpa had at least as much fun as they did!  Best 4 hours and $30 I've spent in a long, LONG time!