OH, to be young again!  I can remember doing station construction projects about 40 years ago and today, there is simply no way I can manage to do things at that level.  Surprised?  Not really, but when my 14 and 15 year old grandsons "help" me, Grandpa sure notices his deficiencies!

This week 15 year-old Owen and 14 year-old Grant came to my QTH for three straight days while they were on Spring Break.  They were really eager to help Grandpa with his EME station construction project.  AND, Grandpa was extremely glad to have their help!!!  A lot of what they helped me do were things they had never done before.  Plus, they did things that they had never even SEEN anyone do before!

The boys are now big enough to wear my tower climbing safety gear so they got some very valuable experience in tower construction.  On the right you can see Grant pulling up and placing the Hazer cage at the top of the tower.  (Click on any image to see it larger.)  This was his first time actually working at height and he was a little unsure about whether he could reach up above the top of the tower to place the Hazer cage.  So, he secured the cage to the top of the tower and his brother, Owen, gave it a try.

On the left you can see Owen placing the Hazer cage over the top of the tower.  He then descended the tower allowing the cage to follow him down to the ground.  Since I had purchased the Hazer used, it came already assembled.  Otherwise I suppose I could have built the cage "around" the tower at the bottom and this operation would not have been needed.

Now that the Hazer was in place at the bottom of the tower, we needed to raise the top (and last) tower section into its place.  Grant was eager to get this job so he went up the tower and first pulled up and bolted into place the Gin Pole.  He had never seen this device used before so it was a great learning experience.  Once the Gin Pole was there, Grandpa pulled the top tower section up to Grant.  You can see on the right a photo of when that section reached him.  Even though he had no experience with stacking tower, it took Grant very little time to position the three legs from the top section onto the existing tower and squeeze them together so that they mated with each other.  SUCCESS!  We now had the tower complete.  And, I have completed the basic training of my new "Tower Crew" for all future tower projects!

Before the top section of tower was raised, we needed to construct a Pulley Block for the Hazer winch wire.  This mounts at the top of the tower and provides the point where the Hazer Pulley is attached.  This did not come with my used Hazer so Owen cut and drilled a piece of C-Channel for attachment of the pulley and the U-bolts to attach to the tower legs. (See photo on left.) 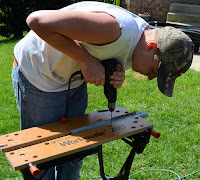 We then attached the Pulley Block to the top tower section before it was raised.  On the right you can see a photo of the mounted Pulley Block that I took after the tower was erected.

At this point the boys had to go home sooner than we expected.  Unfortunately, this left Grandpa to climb the tower, pull up the winch cable, thread it through the pulley and drop it to the ground through the center of the tower, put the last three bolts in the leg joints, remove the Gin Pole, wind up the rope, and put everything away.  WHEW!  That was a LONG two hours of work that the grandsons could have done in about 30 minutes.

The next day Owen and Grant arrived here at 6:50 a.m. (they had arrived at 7:00 a.m. the day before) ready and willing to get on with the project.  However, it took Grandpa a couple of hours to shake the sleep out of his eyes and get to the point where I could get started myself.  If anyone can bottle this type of youthful energy - I'll buy it by the case.

To finish up from our Day 1 projects, Owen drilled two holes for a second U-bolt in the new winch bracket for mounting it to the tower.  We then had 100-feet of new winch cable to attach.  Since the tower is only 28-feet tall it turned out we only needed 50-feet.  So, Owen got the Dremel tool and he cut the cable in half.  That leaves me with a spare 50-feet of cable if something happens to the cable that is now in place.  On the left you can see the winch installed on the tower with the Hazer cage above it.

Now we needed to make an excursion under the house.  I have a hole in the wall behind my ham equipment and all my antenna cables enter the hamshack from underneath the house through holes in the sole plate (two 2x4's) inside the wall.  The boys and I packed up all the gear we needed (large power drill, long bits, head lamps, extension cord, drop light, drinks, etc.) and we began a 75-foot crawl under the house.   The grandsons remembered being in there (what they used to call the "cave") when they were younger but they said it was really MUCH smaller now!  Thank goodness Grandpa had knee pads!  The ground under the plastic moisture barrier is NOT soft and smooth!

We had some difficulty as the original holes were drilled from the top down before the wall was dry-walled.  That wall sits on top of a steel I-beam so our options for drilling were limited.  I ended up drilling at a steep angle a half dozen 3/4-inch holes to make a very ragged opening.  I think I managed to do that without damaging any of the cables that were already in place.  We had also carried with us the azimuth rotor control cable, the RX feedline (LMR400-UF) and a 500-foot roll of 4-conductor shielded cable.  We then ran those up through one of the previously drilled holes into the shack.

After crawling back out of the "cave", we installed the azimuth rotor on the Hazer, connected the cable to the rotor and to the control box inside, and ran through the calibration process.  An issue was discovered that I will need to find an answer for before using the rotor.  As the rotor was being rotated clockwise, it reached a point about 120° where it jumped up to a fast speed for about 45° then reversed to the point where it started and repeated that fast back and forth motion a couple of times before resuming the clockwise rotation.

After dinner the grandsons decided they wanted to try climbing the big Rohn 45G tower down over the hill.  Both went up the 85-foot tower and were amazed at how much better the climbing felt on the bigger tower (the EME tower is Rohn 25G.)  The photo at the right shows Owen at about the 50-foot level.

The boys decided to stay the night with us so we had a great time relaxing that evening.  We watched part of a movie until Owen decided he needed to hit the sack.  Grant just feel asleep on the couch!

The next morning we decided to finish the exit method for the cables from under the house.  It was simplest to just bring them through an existing vent hole.  That hole is covered with an automatic vent cover.  Grant and I took it apart and we each worked on one half to cut a hole in the cover to pass a 2-inch (I.D.) piece of PVC.  You can see a photo of the finished vent cover modification on the left.

While we were starting to fish the Heliax under the house a very strong storm front moved through unexpectedly.  It caught us off-guard and we had to dry off the tools after quickly moving them to the back porch.  Once the rain passed, Owen helped me measure out two 100-foot lengths of the 4-conductor shielded cable, marking both ends of each with colored tape for identification.  Grant made a speed run through the crawl space and fed those wires up through the wall.  That completed the running of 6 of the 9 cables that must be run under the house.  Only the elevation rotor control cable, a 12 VDC and 28 VDC cable now need to be run to complete the cabling under the house.

Those three days of help from my grandsons has helped me to complete the major parts of the tower construction process.  I can finish most of the rest of the project on my own since the infra-structure is now in place.  Many thanks to Owen and Grant for giving me three days of their Spring Break to get all this work done.  They are the BEST!