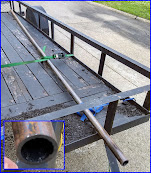 Thankfully a few years ago I had acquired a length of used 1-5/8” Heliax cable (Commscope-Andrew AVA7-50) which had been removed from a cellphone tower.  Click HERE to see a photo of the Grandsons (Owen & Grant) helping me bring the cable home.  (Yes, they were MUCH younger then!)

The next job was to install connectors on the 1-5/8" Heliax.  These connectors are 7/16 DIN female and each connector is 4 x 2-1/2 inches and weighs 1.7 pounds!  Not your typical PL-259.  You can see an image of one of those connectors on the left.  I had worried about how to install these and recently found that Commscope-Andrew makes a special tool to do this.  Click HERE to see a video of this tool (CPT-158U) in operation.  It is just amazing to me to see how simple it is to use this tool.  After watching that video I decided I just "had" to have that tool for this project.  I found it on eBay (new) for $85 so that was purchased.

Then on June 1, 2021, Tim, K8RRT, came to help me install the first connector.  This will be on the end of the cable that is at the top of the tower.  Once the cable is installed and unrolled to the top of the hill, it will be cut to length and the other connector installed.

On the right you can see me working on prepping the cable to install the 7/16 DIN connector.  Note the red-bordered inset - this is what happens when you fail to wear your gloves!  But, this is a GOOD thing.  As amateur radio lore goes, an antenna will just not work right unless you bleed on it!

I can attest that this method (using the Commscope-Andrew Easiax Automated Prep Tool) is totally the berries!  I have installed connectors many times on 1/2-inch and 7/8-inch Heliax over the last 30+ years and this method beats the dickens out of the old methods!  Cut the Heliax off flush, run the Easiax tool (chucked in a power drill) for 5-10 seconds to remove the outer conductor and trim everything else to size.  Then, use the plastic separator tool to separate the foam from the outer conductor, put the two parts of the connector on the cable, and tighten!  DONE!  You can see the installed connector on the left.

Why did I choose to use such large feedline?  Since the feedpoint of the 6-M beam will be 272-feet from the transceiver/amplifier, I need to minimize the loss in that length of feedline.  For the entire 6-M feedline I will use 46-feet of M&P HYPERFLEX 13/.500" cable to connect the antenna balun to the top of the 1-5/8" Heliax.  Then I will run the Heliax down the side of the tower and up to the top of the hill where my shack is located.  This should take 150-feet of the Heliax.  A 10-foot jumper of 1/2" SureFlex Heliax will connect the 1-5/8" Heliax to the 63-feet of  1/2" Heliax (LDF4-50A) that runs under the back yard, under the house and up to the shack.  A 3-foot jumper of the M&P HYPERFLEX 13/.500" will connect to the amplifier.

By using these low-loss cables, and taking into account the loss in all the connectors, the loss in 272-feet of feedline should be only 1.36 dB.  Were I to use Belden 8267 (RG-213) cable (an excellent cable), my feedline loss would have increased to 3.95 dB.  Putting 1,500-watts into the Belden RG-213 would result in only 605 watts reaching the antenna.  900-watts would be lost.  By using the above Heliax feedline, the same 1,500-watts at the amplifier would result in 1,097 watts reaching the antenna.  That's an extra 492 watts or 81% increase in power transfer over using the Belden RG-213.  AND, a reciprocal improvement will be seen on received signals.
The next issue was to see if the current antenna rotor would work.  Since the SteppIR antenna had failed some years ago, I disconnected the rotor in order to protect it. This rotor is an M2 Orion 2800 with the RC2800PX controller.  You can see an image of the controller on the right.

First I fished out from behind the operating desk the pigtail from the rotor control box.  It ended in an 8-pin trailer connector and I plugged that trailer connector pigtail into the mating trailer connector on the lightning arrester.  Then I powered on the rotor.  No joy!  I had no directional indication and when I tried to rotate it, I got an "error" message.  Crap!  So, out came the manual and I started to troubleshoot the problem.

Now that I knew the issue, I began trying to hook up the rotor cable.  But, I had to now figure out which wire in the rotor cable went to which pin in the lightning arrester.  Rather than destroy a $3,000 rotor, I took my time and triple (or more times) checked my work.  You see, there are 8 wires in the cable going to the rotor.  The first problem was that the colors of those wires do not agree with the manual's "Getting Started" section.  Then I saw that the wires in the rotor cable (which is then connected to a lightning arrester and then connected to an 8-pin Trailer Connector), had even DIFFERENT colors of wire.  The mating trailer connector is then wired to the control box - WITH DIFFERENT COLORS OF WIRE!  What a "cluster" that is!

After I eventually resolved the color code problem, I still did resistance checks on the wire to the rotor JUST TO MAKE SURE I did not fry something. Once I was ready, I turned the antenna 30° and ran over to the window to see that it had indeed moved the antenna.   IT'S ALIVE !!!  WHEW!  What a relief.  Then I moved it back and it rotated the other way.  After working for literally HOURS to get the correct wires connected, my rotor now turns the antenna!  YIPPEE!!!  The problem was that while I HAD made notes of the wires color code when it was installed, my notes were confusing after so many years. It turns out that my notes were correct (color to color.)  If I had just added a little bit of a description, then things would have been so much simpler.  Nevertheless, I can now check off "one more thing" that needed to be done on this project.  Forward, ever forward!