Since my 4-element SteppIR antenna was graciously erected by the WVDXA members last weekend, it was now time to build up the SteppIR Tuning Relay I had purchased long ago. The SteppIR Tuning Relay is a device that connects between the PTT line of the transceiver and the PTT input of the amplifier. SteppIR specifies no more than 200 watts be applied to the antenna while it is being tuned from one frequency to another. Doing so could damage the antenna and result in an expensive and time-consuming repair.

So, Larry Phipps, N8LP, has designed a device to detect when the SteppIR is moving and break the PTT line to the amplifier during that time. You can see all of Larry's fine products on his WEB SITE. In addition to this SteppIR Tuning Relay I also own his LP-100 Digital Vector Wattmeter which I dearly love!

After unpacking and checking all the parts I began placing them on the circuit board. This consisted of sticking the leads through the plated holes, soldering them in place and cutting off the leads. I took my time attempting to do a fine job. You can see both the underside and top side of the completed board below (click on any photo to see it larger): 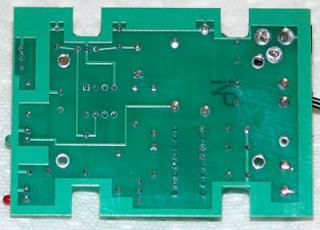 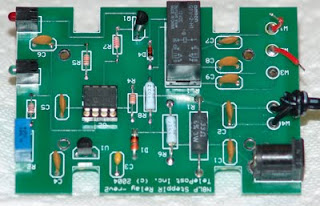 The assembly went easily and took about 2 hours. Once I had all the parts mounted I double checked the placement of the diodes, relay, transistor, and I.C.'s to make sure I had made no mistake. I cleaned the excess rosin off the bottom of the board and then made the simple resistance and voltage checks. Everything checked out OK. At that point I placed the circuit board in the case and buttoned it up.

During normal operation of the SteppIR antenna, an "asterisk" blinks on and off on the SteppIR control box indicating that the antenna is tuning. That is just not enough of a warning to keep you from engaging the PTT and calling the DX especially after you have clicked on a spot which caused your rig to change bands and the SteppIR is moving to the new frequency. With the SteppIR Tuning Relay in place, I now do not worry about accidentally engaging the Alpha while the antenna is moving! 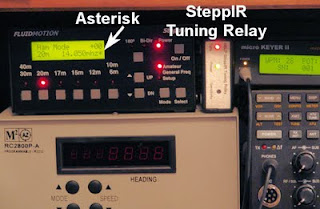 In tests with the amplifier all works perfectly. Now I can comfortably interface the SteppIR controller to the computer so that the antenna will automatically change to the appropriate band when I click on a spot. That is one more step to both automating the station and assuring that the operator does not forget to change the antenna when he changes bands (like I did when I was chasing K4M!)