A funny thing happened today. I had a mis-communication this week with Mike Null, NU8LL, about when he was going to come and do some work on the tower project. So, about 1:30 p.m. Mike called to say he was on his way to the house and was apologizing for taking so long to find all his equipment. WOAH! The last communication I had with him was me asking him how many folks he needed to help him. Somehow, I never received the email he sent me on Thursday night so I thought the work was called off due to the chance of rain today. Mike thinks he was in a bad coverage area all day yesterday and his iPhone failed to properly send the email to me due to lack of network coverage.

THANK GOODNESS Tim, KC8UHE, was off work and agreed to drop everything and come up here to help. I sure hope Tim did not miss a chance to work FT5GA because of his unselfishness! 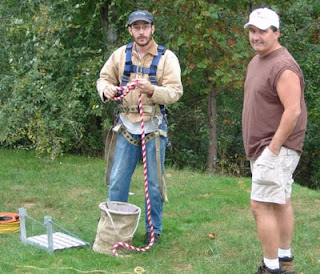 Above you see the entire crew for today's work. Mike on the left and Tim on the right. That meant Mike was the "tower guy" and Tim was "ground crew." It also meant that Mike stood on the tower for a few hours while Tim ran up and down the hill - again, and again and again! Poor Tim, his legs must be killing him tonight.

Below you can see a close up shot of Mike in his climbing gear. Also, another shot of him on the top of the tower. I had one little "clearing" in the trees where I could see him from the hamshack. So, I shot this photo through the window in the shack. He is right at the top of the tower. 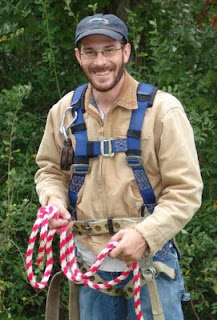 You can click on any photo to see a larger image.
Anyway, in about four hours this two-man crew accomplished the following: removed the TailTwister rotor from the tower, removed the current rotor cable, installed a new thrust bearing on the top accessory shelf, installed the M2 Orion 2800AC rotor (that puppy weighs 45 pounds!) - the installation of the bigger rotor meant the mounting holes had to be slightly enlarged so Mike had to mount and remove the rotor in order to get the holes right. They then pulled up and connected the new rotor cable, dropped the mast onto the new rotor, secured the thrust bearing and did several other small jobs associated with this rotor installation.

In addition, Tim sprayed more Roundup and cleared the brush from the guy anchor positions. I think there is one small tree that still needs to be removed and that may require Papa November's brush cutter.

On Thursday I had prepared the pigtail on the rotor with a quick disconnect connector and ran the rotor through its check out and calibration routine. While the first part of the work was being done today, I installed the mating connector on the rotor cable which was just delivered by UPS yesterday.

The good news now is once we acquire a couple of missing flat washers and some stainless steel spacers, 200-feet of PVC and a "pull box" to connect the PVC together, and some other miscellaneous items - we are READY to pull up the SteppIR! Tom, AB8RL, came by on Tuesday and went over the hill with the SteppIR controller and an MFJ-259B and confirmed that the antenna functions properly after its two-year hibernation standing beside the tower.

Pizza Hut kindly delivered a pizza for the crew at the end of their work so everyone got some calories to make up for all that were expended today. The completion of this project is getting so close that I can almost smell the finish line!