OK, everyone else is having all the fun by working Japan on 6-M and I've been left out in the cold. Yesterday Charlie, N8RR, worked his first JA and I'm jealous! So today at about noon I cracked open the box containing a M2 6M7JHV antenna. I had to make a couple of trips over the hill to retrieve the short tower and the coax from my 80-M wire vertical so today has been a "heavy" work day on the leg. By 6 p.m. I had assembled it by myself and, with the help of my wife, Evelyn, I got it installed on a short portable tower in the front yard. She was not too pleased with that but I told her it would be temporary.
The antenna is fixed on Japan so I hope I can snag one of those fellows in the next day or two. If not, I'll move it to the back yard and try to work the C5 (Gambia) which is coming on soon. I have the Commander Amp warmed up and the K-3 is tuned up so now bring me a JA - please?

UPDATE: Well, no Japan was worked during the Short-Path Summer Solstice Propagation (SSSP) period with the new antenna. However, the antenna shown above in the front yard was moved around to the back patio and on July 4th, I managed to get in on some excellent multi-hop 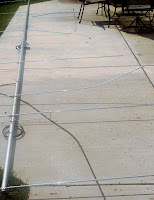 Es and worked THREE New Ones - SV1DH (Greece), T77C (San Marino) and EA6SX (Balearic Islands.) That brings me up to 105 Countries Worked on 6-M. WOOF! What a rush! Obviously the fast and temporary installation of the 6M7JHV was a huge success!

But, it seems there is always a high and then a low. On the evening of July 20th we had quite a storm blow through. I felt the antenna on the temporary tower would be safe since it was now located behind the house and as such, out of the wind. NOT! As you can see from the photo at right (click on photo to enlarge) the wind whipped around and toppled the tower and antenna. I'm just lucky that when the 2-inch fiberglass mast smashed into the bedroom door glass, it did not break. Now I need to order some replacement elements from M2 before I can install the antenna on the big tower. One element is completely broken off and two are bent too far to try to straighten. But, it DID get me THREE New Ones, so I'm still a happy camper!

way to go prez. That is why your the main man. You can come up with the solution to any problem.