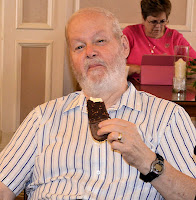 Traveling to Swains Island the team's first stop was in Hawaii.  Several of the operators decided to take a day trip to Pearl Harbor.   See my Post below about Touring Pearl Harbor.  While there, just after I purchased my USS West Virginia hat, I bought an ice cream sandwich for refreshment.  Several of the group noticed this and had some fun ribbing me about it.

Later, after the group had toured the USS Missouri, we took the bus to the aircraft museum where there was a restaurant for lunch.   After lunch, we took a short visit to the gift shop where Hal, W8HC, saw some freeze-dried ice cream sandwiches similar to what astronauts used.  I looked at them but an Australian lady near me said she had tried them and the taste was not that great, so I passed. 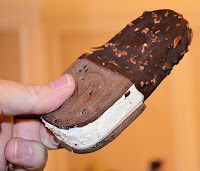 Once the team reached the Tradewinds Hotel in Pago Pago, American Samoa, I found that the gift shop in the hotel also had ice cream sandwiches.  Obviously, I purchased one then and there.

The team only spent one night in American Samoa so once we got up, packed and had breakfast, we had to wait awhile for the transportation to show up to take us to the port.  While we were waiting, Hal, W8HC, visited the hotel gift shop and purchased a novel ice cream sandwich with the brand name of "Magnum."  This was a very interesting ice cream sandwich.  It was one-half traditional sandwich and the other half had been dipped in chocolate with some nut pieces.  You can see a photo of it on the right and a photo of me enjoying it on the upper left.  Obviously, I was trying to drop the internal temperature of my body before the ordeal of Swains Island.  I knew we would have nothing cold during our visit there so I tried to plan ahead.

Once we completed the NH8S operation, we left Swains Island and returned to Pago Pago, American Samoa.  Upon arrival, we left the ship and I was standing in the assembly area waiting on transportation to the hotel.  Suddenly Lou, N2TU, came rushing up to me and handed me a Neapolitan ice cream sandwich.  He had gone across the street to a store and secured one for each of us.  You can see how much I enjoyed that ice cream sandwich in the photo at the left.

Yes, sir, I certainly did enjoy my ice cream sandwiches on this trip - whenever I could find one!  However, I was not the only one.  Craig, K9CT, co-team leader of the NH8S operation, saw what Lou had done and he went across the street to the store and bought an entire box of ice cream sandwiches for the whole team!

Now that you have that information, you can better understand the "special" medicine I delivered to Hal, W8HC, in the Post below.  BTW, Hal is now home from the hospital, still taking antibiotics for the spider bite/infection and is off work the rest of this week to help his recovery.  Get well, buddy.  There are many more ice cream sandwiches out there!