Bad Day for my Van 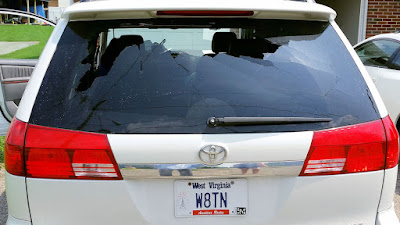 WOOWZER!  What a fun day --- NOT!  The grandsons, Owen & Grant, were sitting with me in the van in Eleanor, WV, waiting on the purchaser of Aunt Edith's house to meet us there.  A fellow who was just out of high school was cutting the yard.  Suddenly there was a loud BANG and the sound of glass shattering.  It seems he ran over the bright yellow "Cap" that is over the gas line in the front yard.  (The grass was really high and I'm sure he didn't see it.)  However, the end result was that the mower flung that really heavy metal cap about 15-feet to where it struck my rear window just under the rear spoiler.  Shattered the crap out of the rear window of the van.  Scared the crap out of the 3 of us who were SITTING in the van at the time as well!  (Click on any photo to see it larger.) 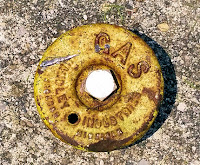 I felt really bad for the lawn mowing kid as after he ascertained that no one was hurt, he began to tell us how his day had gone.  The first mower would not start and when he finally got it going, the blade caught on the internal shroud and messed it up totally.  He called the property owner who eventually brought another old mower (the one that trashed my van) and while waiting for him to show up, the battery died on this kid's car!  Then, he blows out the rear window of a van.  It sure was not a good day for him.

Anyway, the van is in the shop and should be repaired tomorrow.  The cost will be less than my $1,000 deductible but the property owner said he would pay for it.  Heck, even the lawn mowing kid offered to pay for it.  So, it's going to all work out without any major problems and we all have a great story to tell.  . . . Hey, did you hear about the time my van window was blown out by something thrown by a lawnmower?  Yeah, there's lots of mileage in that one for sure!

I agree, you have good fodder for tall tales.

I'm just very glad you and the guys weren't hurt. The van can be fixed good as new. Sounds like pretty quickly, too!

I'll bet the boys get some mileage out of it when they get back to school in the fall, too!