BOY, OH, BOY - This EME Contest was a LOT of FUNNNNNN!

I was not trying for a score in the contest, I just wanted to work folks off the moon and this contest is a good time to do that.  Over the first two nights that I was operational on the moon, I made a total of 10 QSO's which I felt was pretty neat.  Well, in the ARRL EME Contest, I bettered that number by a good bit.  I made a total of 16 QSO's the first night!  And, EIGHTEEN the second! WHEEEEEE!

Several times I heard Roger, KD8BZY, who is quite close to me, working stations with his single 12-element yagi and I know he worked some that I didn't and I might have worked some that he didn't.  I'll bet if we pooled our individual QSO's we'd really have a list. 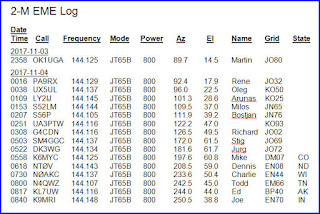 For the most part, everything worked as it should.  I found an issue or two that I'll need to look at but overall, things just purred along like a well-oiled machine.

By 7:20 a.m. I only had 8° of moon left and not much that I coule hear to work so I decided to hit the sack for some Z-Z-Z-Z-Z's.  It is interesting to note that some of the stations I heard in the first weekend of the ARRL EME Context last month when I could only receive,  I was not able to copy them this night when I knew they were on the moon.  This EME stuff is not as easy as you might think [grin].

Anyway, on the left is a log of the completed QSO's I made last night.  The K9MRI station I had worked previously but all the others are New Ones.  Click on the image to get a larger view.

You know, I can't come up with a big enough adjective to describe my elation at being back on-the-moon.  In some respects it is just MIND-BLOWING!

I worked SEVEN stations via EME my first night on the moon.  THREE more the second night.  SIXTEEN the third night and EIGHTEEN on the third night!  I've only  been on-the-moon for 4 nights and I have made 44 EME QSO's.  I never thought I could do this well.

Of those 44 QSO's, 42 were what is called "Initials."  The first time a contact is made with a new station, this is known as an "Initial" on EME. Sometimes stations change callsigns or move.  If a station moves his location into another grid or square then they can be counted as separate "Initials."  However if a station changes his callsign (for instance G6ZTU became GØRUZ), this does not count as a new initial.

The second night was again - "Good News" and "Bad News."  Early in the evening I tried calling CQ (for 1 hour and 10 minutes) with my antennas headed directly into the trees behind the house.  I was answered and made a QSO with YL2GD, RK3FG, and RX1AS.  This is HUGE to know that I can beam east and make QSO's off the moon!  In fact, my first QSO was made with the moon at an elevation of only 4.7° (although the station I worked, HB9Q, was a Super Station running a 45' dish antenna!

The first "Bad News" was that for 4 hours (from 0130-0530 GMT) I could not buy a QSO!  I could see on the Chat page that Roger, KD8BZY, was making contacts during that period.  I am going to assume that Roger has his antenna vertically polarized and I was locked out of working stations because the majority of the signals were coming in on that polarization.  I called many stations but had no response.  Later in the evening I spent an hour calling WO7R in Arizona with no luck.  At one time he did come back to me but could never get my report.  He had one of the strongest signals I copied on the band but he had problems with his "horizontal" receiving and just could not work a lot of stations.  I saw Roger trying for him many times but don't think he worked him either.  I also called K6MYC with a Big-Time signal but he could not hear me.

This difference in polarization can be huge.  If your antennas are not in the same polarization as the signal coming in from the moon, you either get a very weak signal or no signal at all.  I ran with PAØJMV for awhile and he commented on the Chat page: 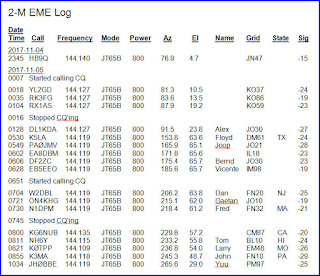 
For him to receive me at -19 dB means he has a GREAT signal from me.  For him to actually HEAR my signal in his speaker is HUGE.  But, at that time, I had zero traces from him.  Nothing, Nada, Zip, Zero, Zilch, . . . you get it - a blank screen.  I think he felt since I was a "newbie" that I had something wrong with the receive side of my system.  However, while running with him, I copied a CQ from an Argentine station and was called by (and worked) K5LA in Texas while running with PAØJMV.  Sort of like an HF pileup!

I think PAØJMV realized we had one-way propagation at that point.  However, no too much later we ran again and in short order completed the QSO.

I called CQ again for about an hour and worked: W2DBL (the guy who just finished working 1,000 initials), ON4KHG and N1DPM.  I'm very pleased with how the CQ'ing thing was working for me.

On the right is my log from the Second Night of the EME Contest. Click on any image to see a larger view.

My first night on the moon, Paul, W2HRO said:

Since there are only two months left in the year, I did not think Paul was going to be right on that call.  However, with 44 QSO's in my first FOUR nights, he just might be right.  And, I'll need ALL that experience to have a shot at working 3YØZ, Bouvet Island, via EME.

Then I saw one of the stations I worked on the second night of the ARRL EME Contest posted the following on the Moon-Bounce reflector:

Thanks for all the fun.

12 of those 44 contacts have already been confirmed via LoTW and I have picked up SIX new entities confirmed on 2-M !  WHEEE!

All in all, I'm Super pleased with how this has gone.  I know that the first 20 countries come pretty easily but, at lest it is a start and I can just build on that.  But first, I need to get back on a "Sleep at Night" schedule instead of "Stay Up All Night and Sleep in the Day."