Wheeeeee!  Big-Time progress was made today.  I did some minor work on the antennas by covering the driven element screws with Coax-Seal, putting some Silica Gel packets in the T/R Relay - LNA box to keep down the condensation, taping some of the control lines together, and making a small re-alignment of the rearward boom.

The next step was to see how far off my rotor indicators were from where they should be.  I had a good visual on the moon so I had Evelyn use the Rain Proof Hoist Crane Pendant to move the antennas as I stood out in the yard to visually align them with the moon.  Once we had the moon square in the sights of the antennas, I went inside and looked at where the MoonSked program said the moon really was in Azimuth and Elevation from my QTH, and compared that to what the rotors indicated on the EA4TX ARS-USB rotor controller.  I then repeated that same operation four more times over the next hour or two.  As it turned out, my Azimuth reading was consistently 7° greater than what it should be and my Elevation reading was 5° less than what it should be.  Here is what the antennas looked like when we had the pointing "nailed."  Note that in the photo below you can see the moon lined up with the left-hand antenna. (Click on any photo to see a larger image.) 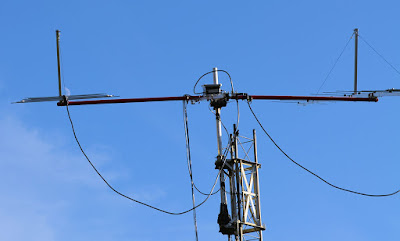 Now here is where things got GOOD!  I have a "driver" program that interfaces between MoonSked and the EA4TX ARS-USB unit and in looking at it, there is a "Setup" button.  When I opened the setup screen, there were two adjustments to "compensate" the readings between the two.  I inserted a +7° in the Azimuth box and -5° in Elevation box and told the driver program to "AutoTrack" the moon.  It adjusted the rotors to exactly where they "should" be pointing and I ran out in the yard to see that BINGO! - the antennas were indeed pointed right at the Lunar Orb!  WHEEEEE!  This is HUGE for my project to have the antennas actually pointing at the moon consistently and the AutoTrack feature working to keep them pointed there regardless of whether or not I can see the moon!

K9MRI is running 8-M2 XP28 Yagi's and 1 kW.  So, he has a pretty big signal.  However, it is interesting to note that at 2300 GMT, the Degradation is 5.8 dB so not the best of conditions.  That probably explains why I was not able to copy the two or three 2-yagi stations that K9MRI worked over the next hour or so.  Still, I'm totally PUMPED that my receive is doing as well as it is.

But, I noticed that while I could copy K9MRI just fine on WSJT 10.0, I had zero copy on MAP65.  I began looking to see what could be causing that program to not receive and realized that when I had selected the Audio Source (which was for the FUNcub Dongle Pro+ SDR Thumb Drive) I had chosen the DirectX audio stream.  There was also an MME audio stream so I selected that instead and a few minutes later, MAP65 copied K9MRI - SUCCESS!

Now as I sat at the computer, I could see both WSJT 10.0 and MAP65 copying the signals off the moon.  This is AWESOME!!!  One reason I was trying to get the MAP65 program running is that it basically works like CW Skimmer in that it listens to 60 kHz of the 2-M band all at once and copies EVERY station it hears.  It prints out the messages that those stations are sending along with the frequency they are transmitting on, the audio frequency offset and the signal strength!  Since I was only able to copy one station tonight, here on the right is the "Messages" window of MAP65 showing the signals I actually copied!

The color code gives the most recent messages in Red, older ones in Yellow and the oldest in Gray.  All I need now is to have a little better conditions so I can hear more stations to see just how valuable this MAP65 program will be to me.

I can't wait for conditions to get better.  And, I am really, really close to being able to transmit.  I have the TX feedline connected, the wiring of the amplifier power supply is nearly complete, and there is not too much I still need to do to finish off this project.  If nothing gets in my way, it should just be a few days until I can echo test. 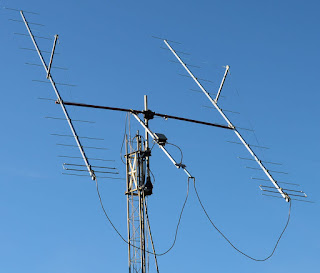 NEWS FLASH!!!  -  As I was typing this, the screen I was typing on was covering the MAP65 screen.  I just took a look and WOW, I had copied another station off the moon:

I actually copied two CQ's from K5LA and this was the strongest one.  K5LA runs four 9-element yagis and is located in El Paso, TX.

Finally, on the left is a shot of the antenna array.  You can see the feedlines from the back of each antenna connecting to the power divider, which then connects to the T/R Relay - LNA box on the rearward boom, and inside that PVC box is the T/R Relay and the LNA (preamp.)

Lots of work has gone into this setup and it's about time for it to pay off!  Right now the moon is down to under 14° Elevation so it's time to shut things down and hit the sack.  I took a look out the front door and the moon is beautifully hanging over Hurricane.  Maybe I'll keep the station listening for a little longer just in case a VK, ZL or JA shows up [grin].

P.S.  A ZL did indeed show up on the Chat page but my noise had jumped up to S-9 so there was no chance for me to copy him.   Another time - I will!

Hi, Clark. Just want to say how much I am vicariously enjoying your EME project. Keep it up, and keep telling the story.