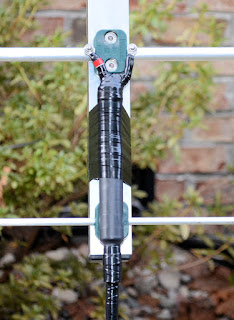 On Wednesday I tackled some odds and ends of this project.  More epoxy was mixed and applied to the holes in the PVC box to house the LNA and T/R Relay.  The box was free to me but had some 10 1/2-inch holes with cable feedthroughs attached.  I did not need all those holes so I plugged them with epoxy.  That was a learning experience as with the first 4 holes I tried to just put the epoxy in the hole and expected it to stay.  But gravity would pull the epoxy down and open up the hole.  For an hour and a half I kept rotating the box around and around hoping the stuff would set up but it didn't!  At that point I had Evelyn cover a 3x5 card with plastic wrap and I placed that over the 4 holes on the inside of the PVC box.  I then found a cardboard box that would fit inside and apply pressure to the plastic wrapped card.  That worked like a charm.  The next morning the plastic wrap pulled right off and the holes were filled.  Learning how to do that made filling the rest of the holes a snap. 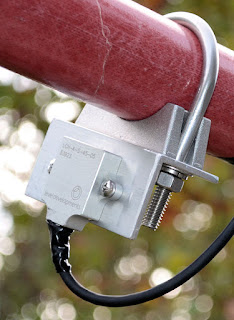 My Step Drill Bit arrived on Wednesday but I had just epoxied the barrier strip to the side of the PVC box so I needed to let that set up before drilling the three 7/8-inch holes for the N-connectors.  A couple of trips to Home Depot were required to obtain some small hardware for mounting the T/R Relay and for the driven element connections on the antennas.  I decided to go ahead and weatherproof the cables going from the antennas to the 2-way power splitter by wrapping them with Scotch 88 electrical tape.  InnovAntennas had already prepared those cables for me with the appropriate connection tab at the antenna end along with Ferrite cores in water-sealed heatsink and N-type male connectors on the other end.  Still, I used the Scotch 88 tape to seal everything as water is a major problem with coax.  At this time I determined which terminal was connected to the center-pin of the N-connector and marked it with red tape.  Both antennas had that terminal connected to the same side of the driven element to assure the antennas would be in-phase with each other.

I then manufactured a mount for the inclinometer from a piece of aluminum angle and a DX Engineering 2-inch clamp.  I knew I could rotate the clamp around the cross-boom to adjust the inclinometer to the correct reading but when I drilled the aluminum angle part for mounting the inclinometer, I elongated one hole.  This would allow me a way to "fine tune" the adjustment.  It was well after dark when I had this ready to mount to the antenna so I asked my wife, Evelyn, to help by reading out to me the elevation angle from the EA4TX ARS USB controller while I made the appropriate adjustment to the inclinometer mount while up on a ladder.  That worked great!  However, when I rotated the antenna and checked the elevation with a digital level, the reading on the ARS USB box did not agree.  Looks like I need to calibrate the inclinometer.

Using the Step Drill Bit it was a SNAP to enlarge the one hole and drill two others large enough to pass a cable with an N-connector attached through the PVC box.  Having the right tool makes a huge difference in any job.  This is probably not the best tool for this job but it worked great for me!  Once I was able to pass a cable through the side of the box (simulating the cable that would come from the power divider) it was easy to position the T/R relay and drill a couple of mounting holes for in in the metal plate that was already attached to the bottom of the PVC box.  The LNA would just be supported by the connectors so no mounting was needed there.  With the T/R Relay mounted, I now moved on to wiring the relay and LNA to the barrier strip. 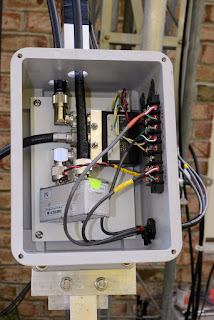 I made sure to put a diode across the coil of the T/R Relay.  This is done because an inductor (the relay coil) cannot change it's current instantly so the flyback diode provides a path for the current when the coil is switched off. Otherwise, a voltage spike will occur that may cause arcing on switch contacts or possibly destroy switching transistors.

The T/R relay I am using (Relcom RDL-SR012) has a set of contacts that will indicate when the relay has switched.  There are three contacts: C-Common, NO-Normally Open, and NC-Normally Closed.  I wired those to the Barrier Strip and a shielded cable brings them down to the shack.

12 VDC connections for the LNA and 24 VDC connections for the T/R Relay were also wired to the barrier strip.  They will be connected over separate shielded cables to the appropriate voltage sources in the shack.  In the photo on the right you can see everything hooked up.  Three shielded cables exit the box through one of the feedthroughs that came with the box and they are color coded (to try and prevent me from making more mistakes!)  The LNA is at the bottom (mounted on a slight angle to allow for easier cable entry into the box.  The T/R Relay is on the bottom and the Barrier Strip on the right.  You can see markings on the inside of the box above the Barrier Strip to note what gets hook to what screw.  The LNA is connected to the Normally Open contact on the T/R Relay with a right-angle N-connector.  This just keeps the loss to a minimum and makes the box less crowded than if I had used a cable.  All the spade lugs are crimped AND soldered.  Why?  Because I'm excessively fussy (some would say "anal!") You can click on any photo to see a larger image.

The last few things I did before calling it a day was to install a clamp to hold the 7/8-inch Heliax (TX feedline) to the Hazer cage.  Then I put the cover on the LNA and T/R Relay box and weather-proofed the holes around the cables.  Finally, I rotated the antennas to exactly vertical (90.0° on the SmartLevel) in order to calibrate the inclinometer.  Much to my surprise, the EA4TX ARS USB controller says the array is pointed at 94° so that was nice.  I may not have to do much to finish the calibration of the inclinometer.

I woke up this morning at 4:00 a.m., checked the beautiful moon, but then could not get back to sleep - I was too excited and my mind would not stop thinking about this project.  Right now my battery has pretty much run down and I'll be crashing soon.  Should have no trouble sleeping tonight!