First Signals Off the Moon Decoded!

This is what I've been working toward.  Being able to make QSO's via MoonBounce (EME) starts with first being able to hear stations over that path.  The old ham radio adage of "If you can't hear 'em, you can't work 'em" certainly applies to EME.

Last night was the beginning of the first of two ARRL EME Contest weekends.  I had been pushing hard for the last 17 days or so to get the station operational by the contest.  The way I have the antenna array mounted on the Hazer, I am limited by how much I can rotate the antennas around the tower until the Hazer is at the top of the tower.  Until then, I am able to only reach 180° from the West so until the moon reached that position, I had no chance to see if things were working.  Last night that meant that I would not have moon until 0620 GMT (or 2:20 a.m. EDT.)  I set my clock for 2 a.m. and got about 4 hours sleep before getting up to see if things would work.

All the equipment was ready to attempt receiving but the transmit side has more work to be done.  Once I got everything powered on and properly connected, I started running WSJT-X and immediately saw there was a problem.  The screenshot below shows the birdies that were populating the spectrum.

The first minute or so shown at the bottom of the above image (07:56-07:57 GMT) was with no antenna connected.  Then I connected the antenna array and the birdies got much worse.  I was pretty bummed out after all the work I had done on this project.  But, after some time I finally tracked it down to the video card in the XP computer.  When the monitor went to sleep, the noise disappeared.  Just turning the monitor off did not help so I believe it is the video card.  At that point, I shut down the XP machine and went back to using the WIN 7 computer.

It took a bit to get everything re-configured to the Win7 computer but finally that was done.  I went outside several times to visually check the alignment of the antennas as I knew the inclinometer and the azimuth rotor were not calibrated.  Having the Rain Proof Hoist Crane Pendant at the base of the tower to control the rotors made it really easy to point the antennas at the moon.

Below is a screen shot of what I copied.  You can see the DT parameter says the signal arrived at my QTH approximately 3.4 seconds after it was sent.  That time (about 3 seconds +/- the difference between the computer clocks of both stations) is the round-trip for the signal at "speed-of-light" to get to the moon and back.

My received signal strength on him was -26 dB and the * after the "1" in the W column indicates that an adequate level of synchronization has been achieved.  Again at 1046 GMT (6:46 a.m. EDT), I copied another CQ from N1DPM.  This time his signal was -23 dB or 3 dB better than the last time.  N1DPM is running four, 9-element yagis and a kW. 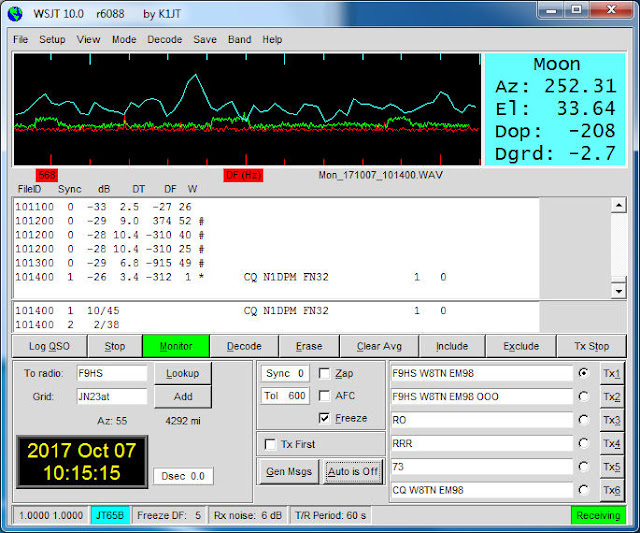 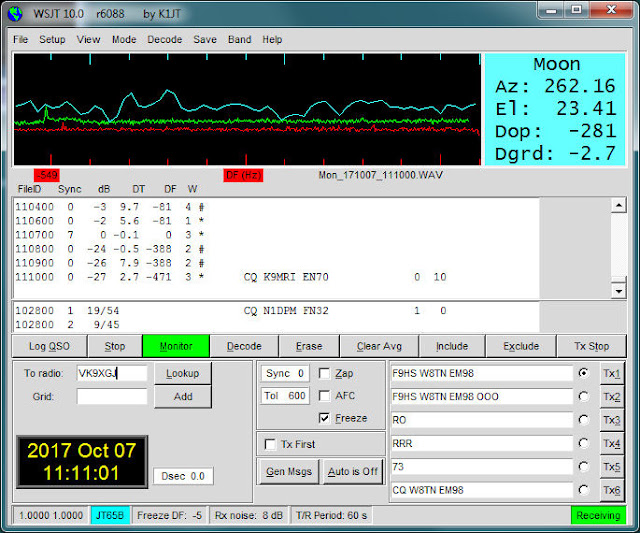 This was really gratifying to be able to copy signals off the moon even though the system is still hay-wired a bit.  I then spent some time trying to get the MAP65 software operational.  I did manage to get it working on the Win7 computer and copied a local EME'er, Roger, KD8BZY, direct but not off the moon as I could no longer see the moon to aim the antennas. That did show that MAP65 was working.

Now I need to work on calibrating the rotors and getting the transmit side working.  I won't be able to have it done this weekend but will have it operational on transmit before the next ARRL EME Contest weekend in November.  BIG-TIME Progress to this point!  I CAN now receive EME signals!!!  It won't be long until I can start making QSO's.