On Friday morning, Charlie, N8RR, came and brought his SARK-110 Antenna Analyzer to my QTH to check out my 2-M antennas and tune them for best SWR. With the SARK hooked to his laptop we were able to make the adjustments to the driven element pretty easily.  We would pull the antenna array up with the Hazer until it was several feet in the air and rotate it until it was elevated at about 45°.  Checking it with the SARK told us where the SWR was for the lower part of the 2-M band.  Then we cranked down the Hazer and made an adjustment to the driven element before cranking it back up to check it with the SARK again.  It took about 3 tries to reach the lowest SWR.  Interestingly enough, there was no traditional "dip" just a very FLAT response curve.  We expanded the range of the SARK Analyzer to see what happened to the curve down in the 130 MHz range and that told us we needed to shorten the driven element to move the lowest SWR up into the ham band.  Once we got an acceptable match on the first antenna, we then adjusted the second antenna to the same dimensions as the first in just one operation. 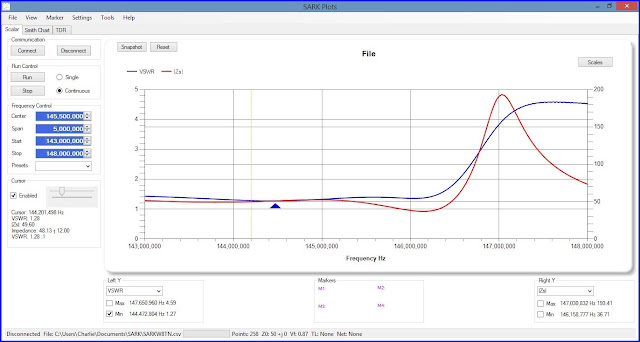 On the above plot the blue line represents the VSWR and the red line represents the Zs or absolute magnitude of the antenna's impedance.  As you can see, between 144 and 145 MHz, the VSWR is very close to 1.3:1 and the Zs (impedance) is right near 50 ohms for the ENTIRE range!  (The VSWR scale is on the left and the Zs scale is on the right. Click on the image to see it larger.)  For example, we set the cursor at 144.2 MHz and at that point the VSWR was 1.28:1 and the Zs was 49.6 ohms.  The Blue Triangle on the plot represents where the SARK found the minimum VSWR of 1.27:1 at 144.472.804 MHz.

At that point, we felt confident that the antenna array would play and called it a day.  Charlie had to get back home so we did not have time to calibrate the inclinometer nor do a couple of other small jobs that will need to be done later.  Still, this was a great step forward in the EME project.